Star Trek Theory: Spock Had Feelings For His Foster Sister 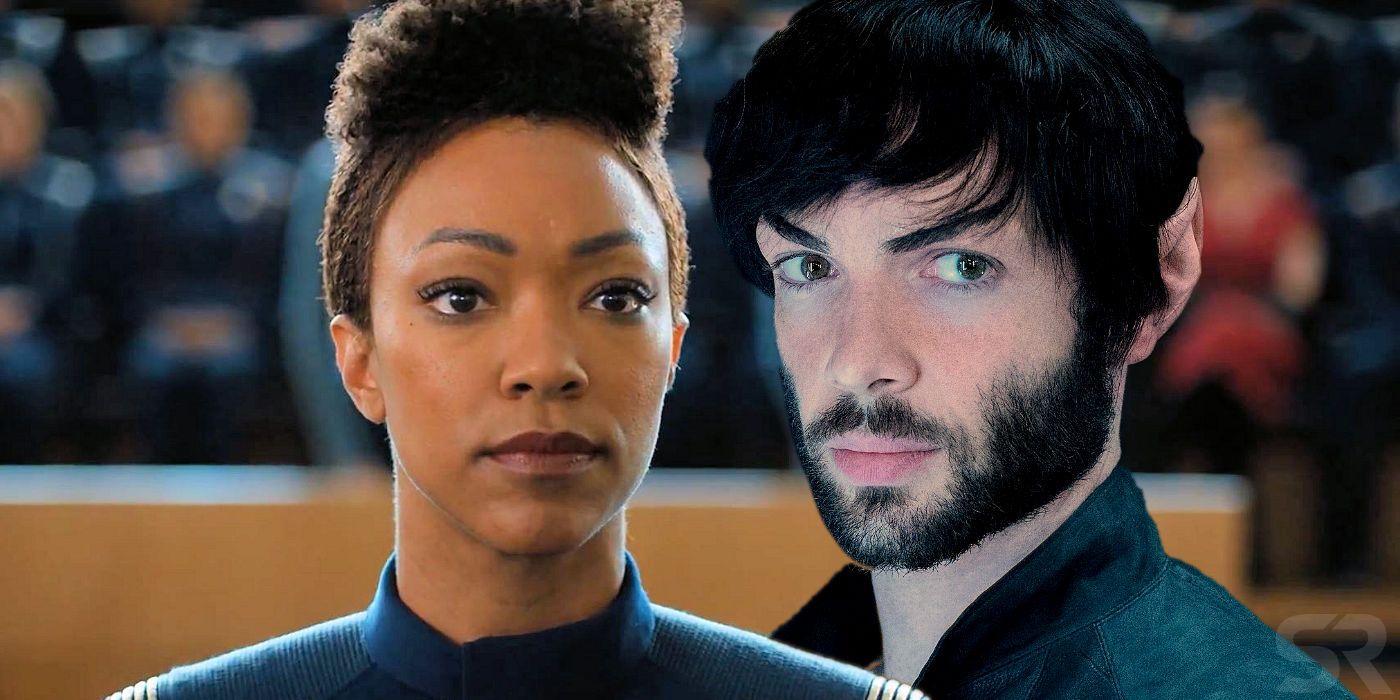 In Star Trek: Discovery, did Spock develop romantic feelings for his foster sister Michael Burnham? Star Trek: Discovery season 2 launched with a mystery surrounding seven mysterious red lights in space called the Red Angel but concurrently, this unknown threat is tied to an unrevealed past event between Spock and Michael when they grew up together on Vulcan. However, Spock didn't appear in "Brother" and he actually left Enterprise to pursue the Red Angel, leaving fans to speculate on what happened.

The Star Trek: Discovery season 2 premiere, "Brother," didn't reveal the details of what led to Spock and Michael no longer having a relationship but based on Michael's behavior in the episode, what she said in voiceover narration and, perhaps more crucially, the things she left unsaid, we can begin to connect the dots. Something definitely caused a rift between them and it was serious - perhaps even embarrassing - enough that they kept it from their father Sarek. It's logical to surmise that Spock developed feelings for Michael, and possibly vice-versa, which ultimately led to them being estranged for years.

Related: Spock Is Missing On Star Trek: Discovery: A Theory On His Location And The Red Map

While it might seem salacious, a possible past romantic encounter between Spock and Michael isn't beyond the bounds of Star Trek: Discovery. After all, Gabriel Lorca and the Mirror Universe's Michael Burnham were in a sexual relationship, which is something Lorca wanted to pursue with the prime Michael as well. Star Trek: Discovery has pushed the boundaries of Star Trek tackling R-rated fare like dropping the "F-bomb" but even classic Star Trek has done eyebrow-raising things with Spock. For instance, after his death and resurrection, Star Trek III: The Search For Spock saw Saavik have sex with the young Spock as he underwent Pon Farr on the Genesis Planet. Something similar could have happened between Michael and Spock in the past.

Michael Was Worried About Seeing Spock On Discovery Season 2

Michael Burnham is no stranger to emotional distress but her behavior in "Brother" was markedly different from the turmoil she went through as she coped with the ramifications of being Starfleet's first mutineer who caused the Klingon War. This time, Michael was both scared and anxious at the possibility of seeing Spock again, but when he didn't materialize aboard the Discovery, she was hurt, not relieved. For most of Star Trek: Discovery's "Brother," Michael believed Spock remained aboard the Enterprise to avoid her and she blamed herself. In fact, she even told Captain Pike that she was to blame for not having a relationship with Spock.

As a Starfleet Officer, Michael tends to be passionate and detail-oriented when she speaks, but when it comes to Spock and their past, she was purposefully taciturn. When she spoke to Sarek, the Vulcan Ambassador noted that he could hear "the notes missing" in what Michael was trying to tell him, meaning that Michael was withholding a lot of vital information - possibly because it's embarrassing or even shameful, especially for their father to hear. Whatever happened between Spock and Michael, it's something apparently only the two of them are aware of, and it's something Michael has kept hidden, even from the mind meld she has shared with Sarek in the past.

Michael Was Meant To Teach Spock Empathy As A Child

Sarek told Michael that the main thing he hoped Spock would learn from having Michael as his foster sister was empathy. The Vulcan Ambassador knew that understanding his own emotions as a half-human would be vital for Spock in dealing with other humans. However, because Spock cut himself off from both Michael and Sarek when he joined Starfleet, Sarek expressed his disappointment that his son failed to embrace the lesson of empathy. Michael responded that she knows for a fact "empathy is very real" to Spock. But how much does she really know about Spock's capacity for empathy? Though Sarek respectfully didn't press Michael for details, and Michael wasn't keen to discuss them with her foster father, there are implications in what Michael is leaving unsaid.

Michael's flashbacks and voice-overs in Star Trek: Discovery's season 2 premiere kept going back to Spock. Michael was four years older than Spock when she came to live with Sarek and Amanda but they were both still children. At first, Spock rejected his new human foster sister and literally shut the door in her face. However, their relationship evidently warmed from there - at least, in Michael's words, "for a time." We see that not long after Michael's arrival, Spock was smiling as he watched Amanda read Alice's Adventures in Wonderland to her, so Spock had already begun to accept his foster sister at this young age. But what happened between them as they both grew into adulthood? Could the answers be found in Spock's Vulcan biology and his undergoing Pon Farr?

Page 2: What Spock Having Feelings For Michael Means For Season 2

Evidence Spock Had Feelings For Michael (And Vice-Versa)

Did Spock develop feelings for Michael that go beyond mere empathy? Based on what we learned from Michael's behavior during Star Trek: Discovery's "Brother" and what we know about Spock and Michael growing up on Vulcan together, we can make some guesses. Spock has always guarded his personal life but we do know he was betrothed to marry T'Pring as a child, a marriage he did not want, which was ultimately annulled years later in The Original Series episode "Amok Time." Star Trek never elaborated on why Spock didn't want to marry T'Pring; it was inferred it was because he wanted to dedicate his life to Starfleet. But will we learn in Discovery that it was actually because, during those years on Vulcan, his romantic feelings were reserved for Michael?

From Michael's point of view, it's actually logical she could have been romantically involved with Spock. As a teenager living on Vulcan, she would have found extremely limited options for a boyfriend since she is human. The Vulcans' general disdain for humans would have left her isolated and lonely; meanwhile, we know Spock also endured the same type of prejudice, since he's half-human/half-Vulcan and had struggled to reconcile this. Naturally, they would have found kindred spirits in each other and things might have blossomed from there, especially during their tumultuous teenage years.

Related: Star Trek: Discovery: Everything That Happened Between Seasons 1 & 2

Spock should have also undergone Pon Farr, the Vulcan mating ritual, for the first time when he hit puberty (like he did on the Genesis planet in Star Trek III). The question is, was Michael present for this? When Michael told Sarek that Spock accepted her "for a time," the implication is that he accepted her as more than just as his sister. Michael's reluctance to provide any further details to Sarek fuels this line of speculation. Whatever did happen between Michael and Spock, Michael takes the blame for the relationship going sour, indicating she was the one who rejected Spock or ended what was going on. It's even possible Michael broke Spock's heart.

What This Means For Star Trek: Discovery Season 2

A possible past relationship between Spock and Michael in Star Trek: Discovery would echo the relationship in the J.J. Abrams-produced Star Trek films between Zachary Quinto's Spock and Zoe Saldana's Uhura. After all, it's now canon that Spock is attracted to beautiful and intelligent African-American women. Meanwhile, even though she didn't realize Ash Tyler was really the surgically-altered Klingon Voq, Michael's season 1 love affair still counts as her having the capacity to fall for an alien.

By virtue of being a prequel series, Star Trek: Discovery looks to be capitalizing on this prime opportunity to answer a lot of questions about Spock's past. When fans meet him in The Original Series, he is the cool, efficient, fully-formed Vulcan we know and the best friend of Captain Kirk. Star Trek: Discovery, meanwhile, gets to explore the younger, rawer Spock that fans have only gotten a glimpse of in The Original Series' pilot, "The Cage." What Star Trek: Discovery reveals about Spock and his past with Michael will then add extra nuance to many of the choices and actions we know he'll make in the future.

As Star Trek: Discovery season 2 progresses (and as Discovery continues to inch towards Star Trek: The Original Series), Michael is bound to follow the clues in the star map Spock left behind on the Enterprise, which should lead her not just to Spock but likely to the Red Angel as well. However, just as fascinating will be Spock's reunion with Michael and the revelation of just what happened between them during their teenage years. The truth could well be something entirely different, but if not, it would be perfectly logical if Spock and Michael shared a romance in the past. The friction between them in the present will no doubt color how they embark on saving the galaxy together on Star Trek: Discovery.

This entry was posted by Screen Rant on January 22, 2019 at 7:01 am, and is filed under TV News. Follow any responses to this post through RSS 2.0. You can skip to the end and leave a response. Pinging is currently not allowed.