Star Wars Episode X: The Series? Why The Skywalker Saga’s Future Is TV 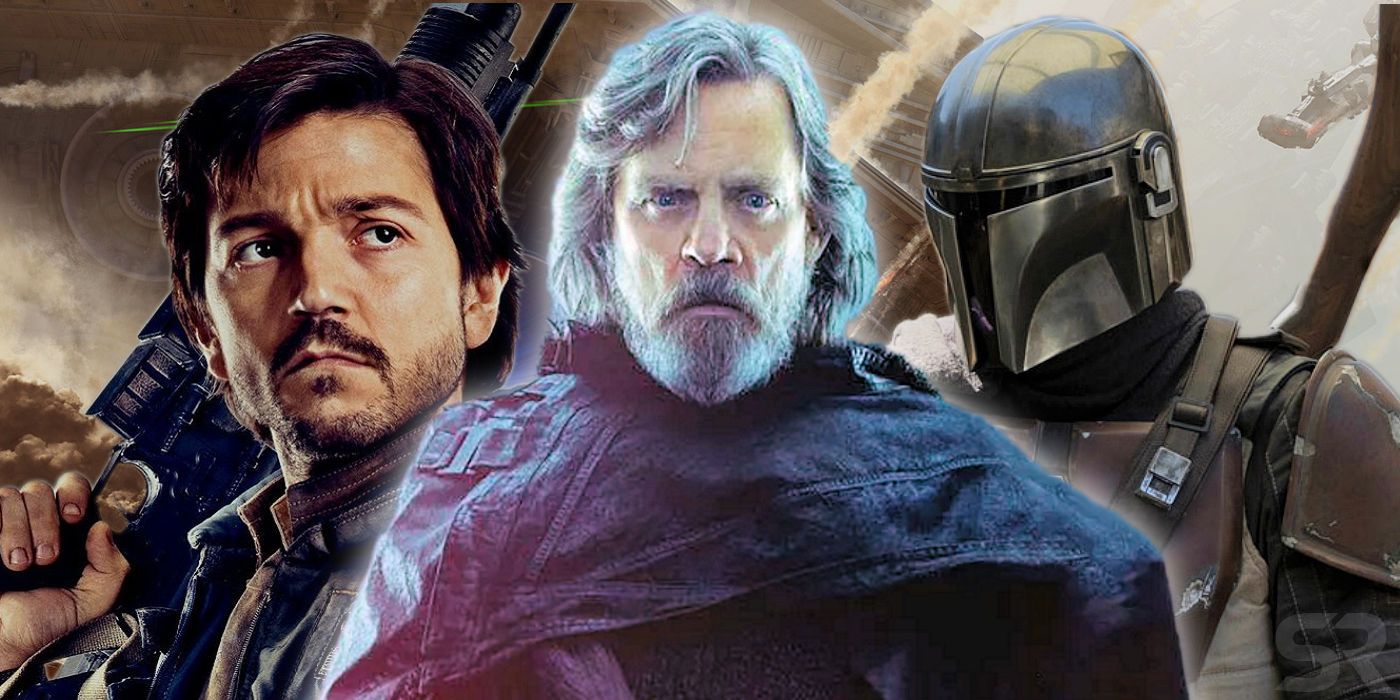 This year marks the end of Star Wars' Skywalker saga on film, with Star Wars: Episode IX, but that doesn't mean it can't continue on television - as is evidenced by what Lucasfilm already has in production. Some 14 years after George Lucas was planning Star Wars: Underworld as the Star Wars prequel trilogy came to a close, Star Wars fans are now getting their first ever live-action TV show in The Mandalorian , which comes just as the Star Wars sequel trilogy is ending.

The Mandalorian is just one part of Disney and Lucasfilm’s ambitious plans for Star Wars on TV, with more shows - both live-action and animated - on the way. Interestingly, this comes at a time when the future of the movie side of the franchise looks rather uncertain, as this is the first time since Disney acquired Lucasfilm in 2012 that there's only one Star Wars movie on the docket; nothing else is currently in production or even pre-production. We know far more about the upcoming TV shows than we do any future Star Wars movie.

In turn, then, this reveals something else about Lucasfilm’s strategy. The Star Wars movies can go off and do their own, different thing after Star Wars: Episode IX hits theaters this December, and then, on TV (or rather, on the Disney Plus streaming service), the Skywalker saga can be continued for years to come.

Only four years after it started, Disney's Star Wars sequel trilogy is coming to a close. J.J. Abrams is back for Star Wars: Episode IX to finish what he started, but this isn't just closing out a story of the last three movies. As well as finishing (for now) the story of Rey, Kylo Ren, and the rest of the saga's newcomers, Star Wars: Episode IX will also end the Skywalker Saga.

The story that started with the original Star Wars all the way in 1977 is going to wrap up for good. And to end the Skywalkers, you need some Skywalkers. That's why Mark Hamill is returning as Luke Skywalker, despite having died in Star Wars: The Last Jedi. It's why Abrams is repurposing old footage of the late Carrie Fisher. Luke, though, will only be a Force Ghost, and Leia can't have too big of a role. Both characters will be gone after this, and so too might Kylo Ren, the last surviving member of the Skywalker line, and one who looks unlikely to continue it anytime soon.

Of course, nothing really ends in Hollywood anymore. Disney making more episodic Star Wars movies seems likely, after they've taken a small break, of course. The Mouse House might even attempt to bring back Kylo Ren (and Rey, for that matter), if Star Wars: Episode IX doesn't kill him off, that is. But, for now, and for all intents and purposes, 2019 is the line in the sand for the Skywalker saga.

Back to 2015, Disney was preparing to launch their new Star Wars trilogy with Star Wars: The Force Awakens. And before that movie released, the future of Star Wars was quite clear: Rian Johnson would write and direct Star Wars: Episode VIII, and then control would pass onto Colin Trevorrow for Star Wars: Episode IX. In between those movies would be anthology films: Rogue One: A Star Wars Story, directed by Gareth Edwards, was set for 2016, and a Han Solo movie, to be directed by Phil Lord and Christopher Miller, was slated for 2018. Five films, five different years, five filmmakers. It all seemed so easy.

Obviously, some things didn't quite go according to plan - Trevorrow is no longer directing Star Wars: Episode IX and Solo: A Star Wars Story ended up being helmed by Ron Howard, after Lord and Miller were let go just three weeks before principal photography was scheduled to complete - but they've still stuck to that schedule. Contrast that to what comes next; there are no release dates beyond Star Wars: Episode IX. What we do know, though, is that the movies that are coming will be different and distinct to what's come before.

Johnson's new Star Wars trilogy, which he'll write and perhaps direct, is going to be entirely separate from the Skywalker saga. Johnson is instead going to do something completely original with his new films, going to entirely new places with brand new characters. In addition to that, Game of Thrones creators D.B. Weiss and David Benioff are creating their own Star Wars movies. This might be an adaptation - it's not specifically brand new - but it, too, will be removed from the Skywalker Saga. As it stands, these are the only Star Wars movies in any stage of development. Boba Fett and Obi-Wan Kenobi spin-offs have been canceled, Solo sequels aren't happening, and there's nothing episodic beyond Star Wars: Episode IX. The Skywalker saga is really ending (on film).

Page 2 of 2: How The Skywalker Saga Continues On TV

How The Skywalker Saga Continues On TV

While there's only one upcoming Star Wars movie that's in production, plans for Lucasfilm's TV side are much more concrete, and it's here that the Skywalker saga is actually able to continue beyond Star Wars: Episode IX. In part, this is already happening. Disney XD's Star Wars Resistance is practically taking place in the same time period as Star Wars: The Last Jedi, and has featured characters from the sequel trilogy. Furthermore, Kylo Ren has been name-dropped already, which directly ties the show to the Skywalker saga. Since Disney's other animated offerings ran for a good few years each, it's even possible Star Wars Resistance could continue beyond Star Wars: Episode IX. That would mean a story partially connected to the main saga continuing on TV after the movies wrap up.

Then there's Disney Plus, which launches this year, where we'll be getting multiple live-action Star Wars TV shows. First up is The Mandalorian, which tells a new story about a new character, but is still somewhat linked to the Skywalker saga. It's set a few years after Return of The Jedi, which means it'll be in a galaxy very much impacted by the events of the original trilogy. There's also the confirmed return of IG-88, meaning at least one character from the saga will appear. Based on that, there's a good chance more Star Wars characters will follow. Even if it isn't characters, there's the possibility for locations, including the Skywalker locale, Tatooine, to appear, since The Mandalorian takes place in the outer reaches of the Star Wars galaxy.

Likely arriving in 2020 is Disney Plus' Cassian Andor series, which is meant to be a prequel to Rogue One, with Diego Luna reprising his role as the titular character. Again, it's directly tied to the Skywalker saga because it will be about the early years of the Rebel Alliance (as well as Cassian becoming the Rebel we meet in Rogue One). That means it's building up to the events of Lucas' A New Hope, and will also be a story where Darth Vader has a presence. The timelines of the Cassian Andor and Mandalorian shows are both ones Disney have looked to explore frequently, and it's highly likely more series will be set there as well, further linking to the Skywalker saga on TV.

What This Means For Star Wars' Future

The Skywalker saga continuing on TV could actually be a great thing for the franchise. It gives the TV shows a tangible link to the movies, while also reducing the risk of them feeling lesser. It opens up avenues for Disney to explore more areas around the original and sequel trilogies, and fill in some of Star Wars' gaps, without having to make movies to do so. Since it's a new format, and presenting new characters, these series will also still feel fresh even if it exists within the same broader narrative line.

In turn, this completely frees up Lucasflim's Star Wars schedule, thus allowing them to continue one of the biggest stories ever told in the entertainment industry while continuing to develop the next era of Star Wars movies. There's no denying the greatness or legacy of the Skywalker saga, but it's also clear the franchise needs to move on. One family has dominated the galaxy's stories for over 40 years. The Star Wars universe is vast and is populated with all kinds of characters and creatures, not to mention stories waiting to be told. Despite that, it's almost always been focused on a relatively small corner of it.

This way, Lucasfilm can still tell the Star Wars stories in the most beloved time periods on TV. Johnson, Weiss, and Benioff, and whoever else comes in, meanwhile, are free to go just about anywhere they want; new time periods, new characters, new settings, and new stories. Star Wars: Episode IX is tantalizing, but this prospect is even more exciting.

More: Every Star Wars 9 Update You Need To Know