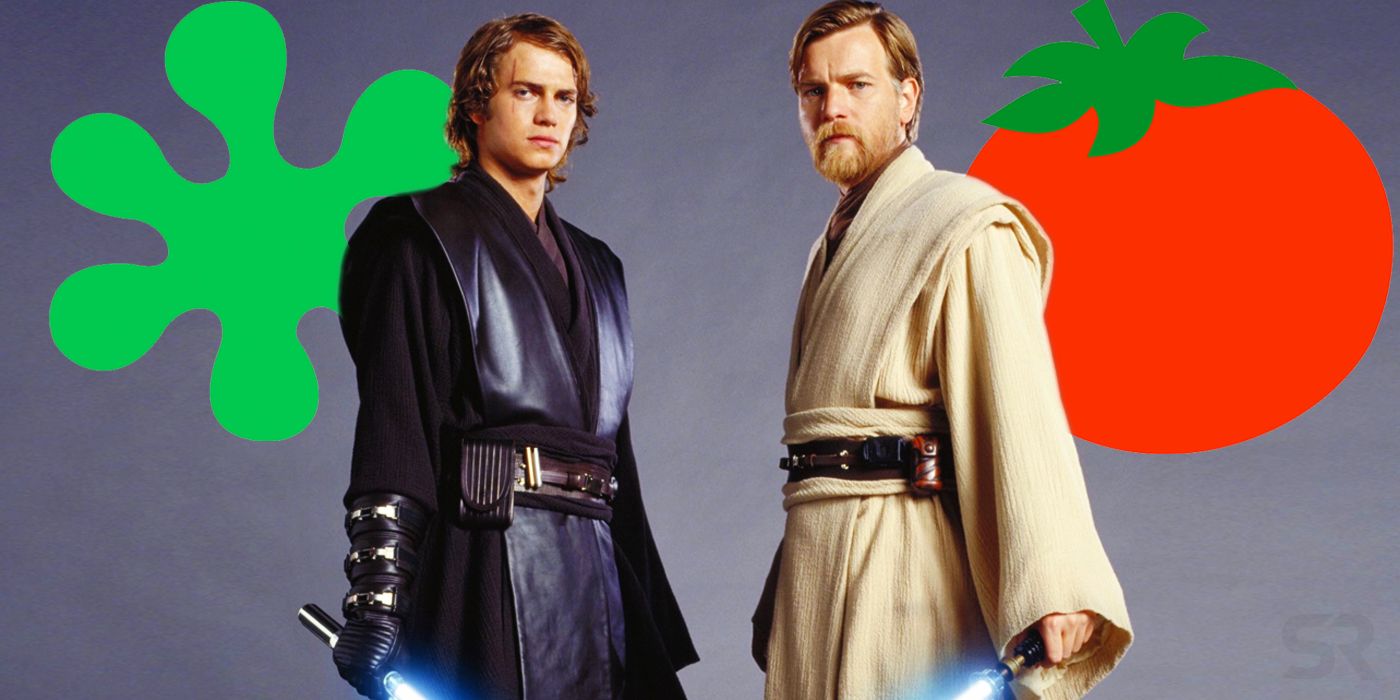 How has opinion on the Star Wars prequels changed over time? We've looked back through the history of Rotten Tomatoes to view how their critic and audience scores have gone down (and up), representing how we all view Star Wars Episodes I-III.

2019 marks the 20th Anniversary of The Phantom Menace, the start of the most controversial movie trilogy of all time. George Lucas' long-gestating prequels to his industry-redefining original trilogy were so highly anticipated that a fall was inevitable, but not even a clairvoyant Force user could have predicted just what a fall it would be. After an initial wave of positivity, each film became regarded as a major disappointment at best, cinematic travesty at worst. Lazy direction, cheesy dialogue, flat romance, dry politics, confounding changes to the lore: the Star Wars prequels had it all, and fans wouldn't let it go.

Related: When Did The Star Wars Prequels Become Cool?

Today, the relationship is even more complex. It's easy to forget now in the Disney era, which have their own controversies relating to reshoots, fired directors and fan-critic divides, that for over a decade the story of Darth Vader's fall was the biggest geek punching bag there was. Yet with the likes of Star Wars: The Last Jedi and Solo: A Star Wars Story challenging fans in different ways, the maligned films are undergoing something of a reappraisal; many are respecting Lucas' clear vision, with the even long-standing hater Simon Pegg coming out in his defense.

But with so much emotion and opinion, it's hard to get a sense of all these intangibles. And so, we turned to Rotten Tomatoes, the review aggregator that blew up in the early-2000s. Using their scores from 2005 to the present, we tracked how opinion on the films had evolved once the Star Wars prequel trilogy was complete. The purpose of this experiment was to see the major influences on Star Wars fandom and its opinion since. The results, however, revealed much more.

To collect this data, we used the Wayback Machine to view the Rotten Tomatoes pages for Star Wars Episodes I-III from 2005 (the earliest records with usable site structure) to the present. The critic "Tomatometer" and audience score have been charted over the past 14 years, creating an image of how this period of backlash was measured by one of the most popular movie aggregators on the internet.

The Phantom Menace Wasn't Rotten Until The 3D Rerelease

Due to the method of collection, the data misses out the first six years of Star Wars Episode I - The Phantom Menace's life; there's no information on the film before early 2005. This means that a lot of fluctuation in both critical and audience appraisal will have already happened. Still, its reputation since is still revealing.

Related: The Last Jedi Is A Reverse Phantom Menace

The Phantom Menace started 2005 on 62%, and stayed in the 61-64% range for the better part of a decade. Episode I only became Rotten in 2012, with the film's ill-advised 3D rerelease. Intended as the first of a complete saga reissue using the new technology, George Lucas' decision to start with his divisive first entry hurt its reputation badly; reviews skewed negative on the film and the effect, sending its score steadily downwards; it went straight to 57% before slowly decreasing to the 54% it's on today. As the only film in the Star Wars prequel trilogy to get a rerelease, this means The Phantom Menace is at a real disadvantage: whether this was a case of the new reviews setting the score straight or the mounting distaste skewing it, this glut of new reviews marked a point of no return.

The film officially going Rotten had an impact on the audience reviews too. It reached a high of 73% approval around the time of Revenge of the Sith's release before leveling out around 67%. It was only in early 2007 when its score dropped down to 60%, possibly spurred on by the 30th Anniversary celebrations causing a full-series reevaluation, but that recovered. It wasn't until 2014, though, that the film became Rotten for audiences, the result of a gradual degrading ever since the 3D rerelease: it had been on 65% before 3D, but quickly fell.

Overall, The Phantom Menace's Rotten Tomatoes scores highlight less the movie and more how, once out of release window, it's really hard for Rotten Tomatoes metrics to show an adjust in opinion, which can have a wider impact. It was only with the 3D re-release that the critics' opinion was truly shown to have turned, while the audience was evidently somewhat influenced by that shift.

Page 2 of 3: Attack of the Clones & The Weird Backlash

Attack of the Clones' Audience Score Only Dipped After 3D & Disney

Again, Star Wars Episode II - Attack of the Clones' data begins in 2005, meaning its initial 2002 release isn't counted. But as a more recent film, its change in opinion can still clearly be seen, as can its similarities and contrasts to The Phantom Menace.

Related: The Most Brutal Reviews The Star Wars Prequels Ever Received

From a critical perspective, Attack of the Clones' story is very boring. It was on 64% at the start of 2005 and is on 65% at the start of 2019, with it only ever going as high as 67%. This is what happens without a major chance for new reviews to present discussion. That said, the impact of certain events can be seen: the film dropped from 67% (which it had held pretty much interrupted since 2008) to 65% in late 2015, reflecting some degree of reevaluation to coincide with the release of Star Wars: The Force Awakens.

But whereas there's no metric of professional reviews, fans have clearly turned on Episode II. It was around the 70% point mark when Revenge of the Sith hit, but then shot down to 66% at the start of 2007 (at a similar rate and time to The Phantom Menace). It gradually recovered to a fairly impressive 69%, but soon found itself depreciating. First, it dropped to 66% in 2012, then to 60% in 2013. This collective impact seems to be a response to two key factors: first, the Disney purchase; second, the film's title was changed to include 3D, expecting a follow-up release to The Phantom Menace, something fans understandably didn't react well to. Once it slipped Rotten in 2015, there was no coming back.

What the audience score changes to Attack of the Clones shows is how depreciation in opinion are directly tied to the rest of the Star Wars prequel trilogy: it's 2007 drop lines up perfectly with The Phantom Menace's, while its later falls match other key moments in the franchise's history. While audiences can influence their score at any point (whereas critics need a published review), they still seem to come at defined moments, rather than being a proper slide.

Revenge of the Sith's Audience Score Was Hacked In 2010

Revenge of the Sith is the only Star Wars prequel we have a full set of data on. But if you think that means we can draw better conclusions about the film's appreciation over time, you'd be wrong. Instead, it's a muddle that highlights just how inaccurate Rotten Tomatoes measurements can be. First, a clarification: from December 2012 to February 2013, the film was marked as "Upcoming" due to the proposed 3D rerelease and so its audience score became "Wants to see". This saw it plummet to 33%, but as it uses entirely different input data can't really be contrasted to what else there is (why this didn't occur for Attack of the Clones is unknown).

Critic-wise, Revenge of the Sith's score is even more boring that Attack of the Clones. After initially getting 83% upon release, it steadied out to 80%, only dropping one point to 79% with Star Wars: The Force Awakens' reappraisals. As Episode III is widely regarded as the best of the Star Wars prequels and is most certainly the subject of the least backlash, a more static score would only be expected.

The audience score, on the other hand, is all over the place. It started off on 96% for the week of release, slowly leveling out around the 85% point for the rest of the decade. Then, in Fall 2010, 32 million new votes caused it to plummet to 64%. Two years later, in October 2012, a further 1.5 million had seen it settle on 65%, the score it holds to this day. The extremity of this cannot be understated. Revenge of the Sith currently has 33.6 million votes on Rotten Tomatoes, 32 million of them cast in the same month in 2010 causing a 20 point drop. In comparison, since its release in December 2015, The Force Awakens has 229,322 audience votes and Star Wars: The Last Jedi only 204,091. Box Office Mojo estimate Episode III sold 59,324,600 tickets domestically.

It's totally unclear what happened to Revenge of the Sith's score, although the obvious suggestion is that the score was hijacked, with an influx of fake scores aiming to take the movie down; at the time, the 64% score made it the lowest scored of the trilogy, perhaps indicating the goal was to get the movie viewed in a less positive light in comparison to its predecessors. This was around the like of both the Mr. Plinkett prequel reviews and The People vs. George Lucas (with the drop happening in the release month of the latter), which plays into the general mood. Rotten Tomatoes hit back at the suggestion that The Last Jedi's low audience score was hacked, but it seems very difficult to suggest otherwise here.

Read More: Revenge of the Sith's Rotten Tomatoes Audience Score Was Broken In 2010

Whatever the case, it's clear that Revenge of the Sith's Rotten Tomatoes page tells us very little about how the movie is actually viewed, but an awful lot about the site and its limitations.

What Rotten Tomatoes Teaches Us About Star Wars (And Vice Versa)

The Rotten Tomatoes information on the Star Wars prequels is rather complicated by a variety of contextual factors that need to be considered to draw any conclusions from them. On the surface, it shows a general decrease in opinion of The Phantom Menace and Attack of the Clones, and an ever-so-slight adjustment in the perception of Revenge of the Sith. However, the way in which this snowballs when there's a key event in Star Wars fandom reveals the distaste is, somewhat expectedly, seasonal.

What's more interesting, though, is what the Star Wars prequels tell us about Rotten Tomatoes. Plainly, it's a rather ineffective tool for gauging the opinion of non-recent movies. They can be influenced by poorly handled rereleases or remain static without, which shape opinions as much as they present them. And that's nothing on the audience side, which is so open to abuse they have to be discounted from the discussion in some cases. If there's one key takeaway from all this, it's that this really is as ineffective a tool as so many cautions.

The goal of this experiment was to see how Star Wars prequel opinion has changed. Instead, we got to see with all three movies that perhaps Rotten Tomatoes isn't the best way to measure opinions at all.

Next: Star Wars Fandom Has Finally Got Over The Prequels - Thanks To Disney