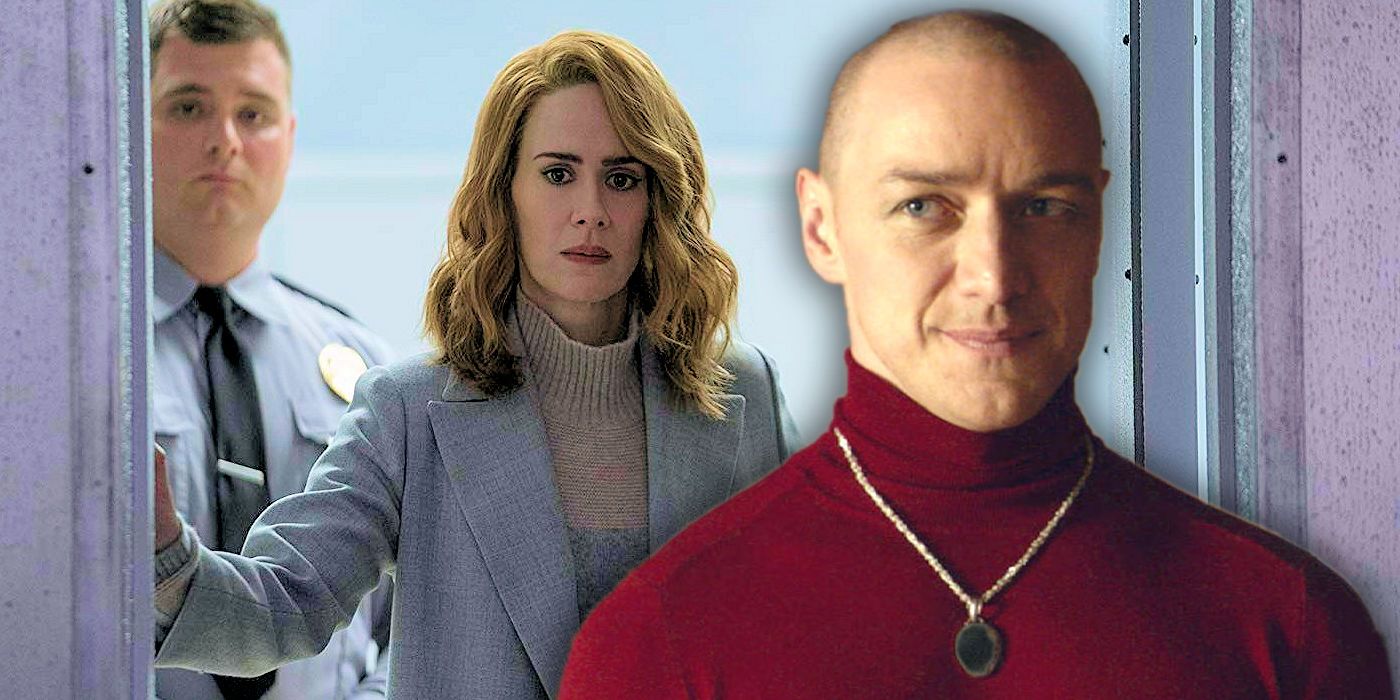 M. Night Shyamalan's Glass brings together familiar characters from Unbreakable and Split, but Sarah Paulson's new character Dr. Ellie Staple may also have been already introduced in Split as well. We know from Glass' trailer that the super strong hero David Dunn (Bruce Willis) finds himself locked up in a mental institution along with his arch-nemesis Elijah Price (Samuel L. Jackson) and Kevin Wendell Crumb (James McAvoy), the villain from Split who can manifest 24 distinct personalities, including the monstrous Beast.

Overseeing them is Dr. Ellie Staple, a psychiatrist who specializes "in a particular type of delusion of grandeur - individuals who believe that they are superheroes." Dr. Staple is the second psychiatrist to treat Kevin Crumb because he murdered his previous shrink, Dr. Karen Fletcher (Betty Buckley), when she discovered that he had abducted three teenage girls, including Casey Cooke (Anya Taylor-Joy) to sacrifice to the Beast.

While Glass marks Ellie's debut in Shyamalan's unofficially titled Eastrail 177 Trilogy (named for the fateful train crash in Unbreakable), she could have already been previously mentioned in Split, which sets up her arrival in the third and final film.

In Split, Dr. Fletcher was the kindly psychiatrist who treated Kevin Crumb and reported her findings about his many disparate personalities to her colleagues. She mostly worked with Barry, one of Kevin's more dominant personalities who protected the others, but she quickly realized that Dennis was manifesting more and more control over Kevin and was even pretending to be Barry. Later, there's a scene where Barry asked Dr. Fletcher how old she is and wondered "who's gonna take care of us when you retire or pass on? You know, we're gonna have to take care of ourselves and no one even believes that we exist." To which, Dr. Fletcher replied, "If ever something were to happen to me, I've made arrangements with a colleague from Baltimore to take over."

The "colleague from Baltimore" Dr. Fletcher spoke of surely must be Dr. Ellie Staple, who would have received Dr. Fletcher's research after she died. This would likely be one of the catalysts for how Staple enters the scene in Glass to tackle the "delusions of grandeur" of David Dunn, Kevin Crumb, and Elijah Price. Foreknowledge of Kevin's condition would be why Dr. Staple has a treatment ready for Kevin's disorder where she uses different strobes of light to cause each of Kevin's identities to take over. All of this info must have been already provided for her by the late Dr. Fletcher.

If Dr. Staple's role in Glass was foreshadowed in Split, it's just another example of how intricately M. Night Shyamalan has designed his shared superhero universe over the years. We know the acclaimed filmmaker's original plan for Unbreakable included a confrontation between David Dunn and an adult Kevin Crumb before Shyamalan cut Kevin out of the movie to fully concentrate on David's origin story. And even though Kevin's story ultimately became Split, the middle film in the trilogy, Shyamalan may still have planted the seeds for Kevin by planting an Easter egg appearance of a young Kevin in Unbreakable.

This kind of meticulous world-building where little details from Unbreakable and Split (like the importance of Glass' colors) could end up being very important in Glass is a trademark of M. Night Shyamalan, who seems to be using the Eastrail 177 train crash to tie the hero and villains' stories together. The question now is what, if any, will the director's signature climactic twist will be in Glass, and what role will Dr. Ellie Staple ultimately play when it all comes to a head?