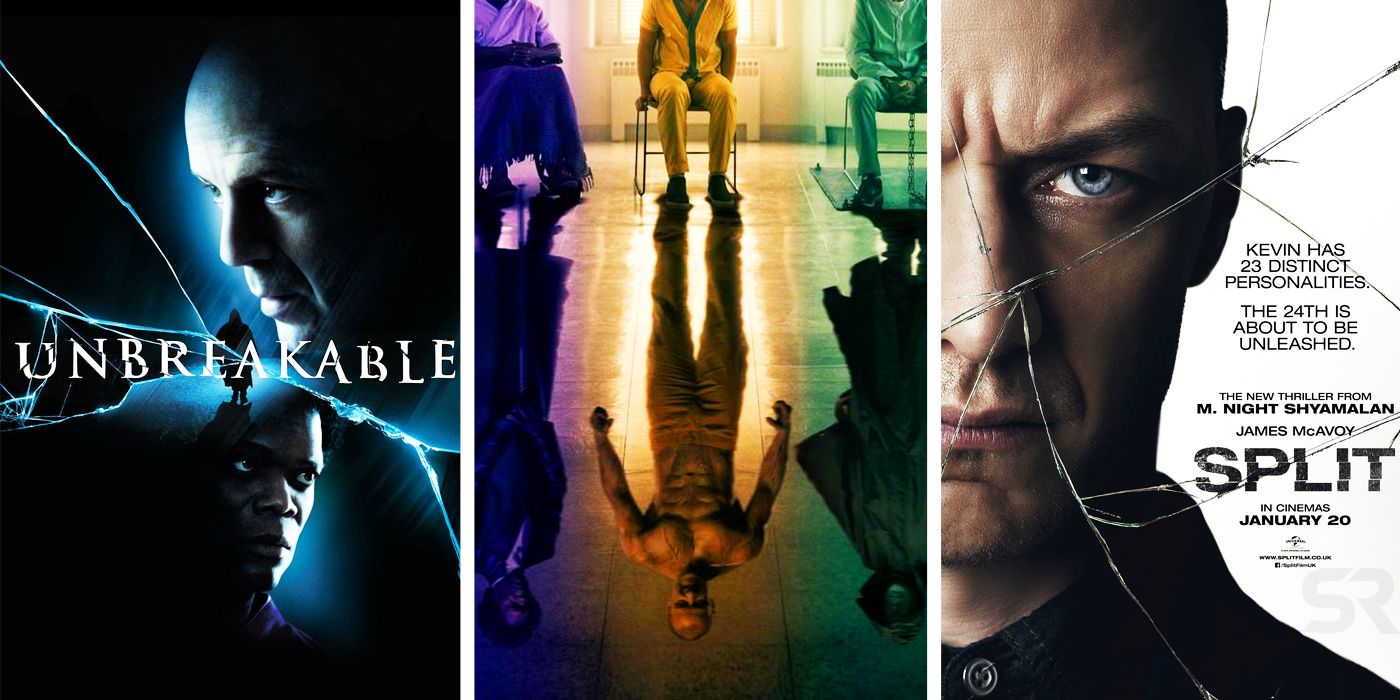 The Unbreakable-Split-Glass trilogy is now complete, but which is the best film? M. Night Shyamalan's latest movie, Glass, is the third and final installment of the creatively-protracted "Eastrail 177 trilogy".

The series began with 2000’s Unbreakable, in which a working-class man learns of his potential superpowers, while the surprise 2016 follow-up, Split, features a man suffering from dissociative identity disorder who kidnaps young women and ultimately transforms into "The Beast." They've now been brought together into a grand, semi-definitive finale with Glass, which sees David Dunn and Elijah Price reunited, and Kevin Wendell Crumb's various personalities employed by the supervillain to enact his long-gestating masterplan.

Now that the shards have settled on Glass’ numerous twists, and its additional surprising connections Unbreakable and Split, it’s time to address important filmmaking questions about the Eastrail 177 trilogy as a whole. Find out the best movie in our ranking of Unbreakable, Split and Glass.

Connecting the narratives of both Unbreakable and Split, Glass aims high but feels entirely didactic with its storytelling. In the primary plot, Unbreakable's reluctant hero David Dunn (Bruce Willis) has become vigilante “The Overseer,” but is captured while battling Split's antagonist Kevin Wendell Crumb (James McAvoy) aka “The Horde.” Both men are institutionalized alongside a heavily-sedated Elijah Price (Samuel L. Jackson) aka Mr. Glass, all the while being examined by Dr. Ellie Staple (Sarah Paulson), a psychiatrist who specializes in treating people with “delusions of grandeur.”

For the average viewer, Glass may feel like a relative success. Shyamalan addresses unresolved questions and properly explains the motivations for each character, exploring how their decisions connect to faith, family, and mental health. The problem is that Shyamalan relishes in overt wink-of-the-eye moments, including his own cameo early on. In terms of the typical superhero genre, this type of filmmaking works as it feels at once endearing and welcoming. However, Shyamalan typically succeeds for the most part with restraint, when he trusts the audience to connect A, B, and C with little exposition.

So, with an engaging story already in place, Glass’ dialogue becomes a crucial factor. Once again, Shyamalan takes a heavy-handed approach while underlining thematic concepts, like how the characters’ lives connect to comic book tropes (Glass makes it clear that it’s an “origin story”). Given the narrative scope, this makes sense, and it allows viewers of various demographics to fully understand the implications. With that said, the delivery often feels awkward, most notably in terms of Jackson’s title character. As a result, the collective performances feel less impactful. Fortunately, the primary female leads - Paulson and Split's Anya Taylor-Joy - deliver remarkable supporting performances, as they’re mostly allowed to interpret the moment rather than Shyamalan's didactic commentary.

In the long run, McAvoy’s Glass performance will be fundamental to the film's legacy. As the narrative progresses, it’s not hard to imagine Shyamalan scripting Crumb's personality switches, instigated by an almost-too-clever plot device. While the guiding dialogue and sudden personality transitions once again feel like Shyamalan patting himself on the back, McAvoy delivers an effective, semi-comedic performance, fully selling each personality through non-verbals. As a whole, Glass feels messy and over-explanatory, but there’s value to be found in the narrative and genre concepts.

Page 2 of 2: Which Movie Is Better: Unbreakable or Split?

Unbreakable was the follow-up to Shyamalan’s 1999 mega-hit The Sixth Sense, a film that features one of cinema’s most famous twists. Watched ignoring what came later, Shyamalan appears to be in full command of his craft with the story of a train crash survivor (Willis As Dunn) who slowly accepts the idea that he might be a superhero, along with the idea that Jackson’s Price may be both brilliant and clinically insane.

Written by Shyamalan, Unbreakable’s script pops with each sequence. The subtext lies beneath the surface, while the visuals suggest a higher power, leaving the audience engaged and intrigued. In addition, Unbreakable features stand-out cinematography from Eduardo Serra, with various shots complement superhero tropes (i.e. a hooded Dunn framed within a football stadium, filmed from the back). Whereas Glass relies on spectacle, Unbreakable thrives with suggestion.

Plus, Unbreakable’s collective performances boost the narrative concepts. The audience can genuinely believe Price’s theories because he’s so articulate when speaking about comics, and because he’s incredibly persuasive with his communication. Similarly, Dunn is forceful when emphatically denying any special powers, though his physical behavior betrays his words. With all due respect to the supporting cast, Unbreakable is mostly a showcase for Willis and Jackson, and their composed performances effectively build the suspense. When Price cries in pain, one can feel it. And when Dunn agonizes over the past, one may easily empathize with his trauma.

All in all, Unbreakable holds up for its structure, narrative suggestion, performances, and the final payoff. Back then, Shyamalan seemed to enjoy the audience’s reaction to his narrative execution. These days, he seems mostly concerned about the viewer's in-the-moment reaction to clever dialogue and nostalgic reminders.

In 2016, Shyamalan made Split as a narratively-unrelated follow-up to the surprise 2015 hit The Visit. But it turned out to be so much more than that. With its pacing, performances, and production aesthetic, Split is the best film of Shyamalan’s Eastrail 177 trilogy.

Right from the script, Shyamalan values structure first, spectacle later. He immediately introduces Split's horror aesthetic, as three teenagers are kidnapped in a parking lot by McAvoy’s character, and they’re subsequently transported to a contained dungeon-like setting, reminiscent of the Saw franchise. Shyamalan clearly announces his intentions, and he doesn’t pretend to be a magician-comedian. Only later does he incorporate comedy and narrative magic via the antagonist’s DID, a device that has unsurprisingly been scrutinized.

At the time of release, audiences did not experience Split with the understanding that it’s the second part of a trilogy, with Shyamalan giving barely any clues. The film instead hones in on its performances of its female leads Haley Lu Richardson, Jessica Sula, and the aforementioned Taylor-Joy playing the prototypical damsels in distress opposite McAvoy’s The Horde. Because this narrative world is limited (mostly) to a dungeon, Shyamalan also limits his dialogue to protect the final reveal (it's only gradually revealed the story is set in Philidelphia), something that only fuels the horror.

While opening credits don’t reflect a film’s true value, Split’s intro suggests that Shyamalan knows exactly what he wants to accomplish. There’s a Hitchcockian feel to Split’s suspense, and the superhero elements foreshadow larger concepts. From act to act, Shyamalan allows each performer to shine by interpreting his dialogue, rather than reminding the viewer that he’s a clever storyteller. With Split, the director effectively incorporates various genre elements to underline his performers’ talent, and to complement the base story structure. The best Shyamalan films are those in which he drops the ego and embraces the craft.

NEXT: Glass Needs A Sequel: What's Next For The Unbreakable Universe?