What Spider-Man: Far From Home’s Trailer Reveals About Avengers: Endgame 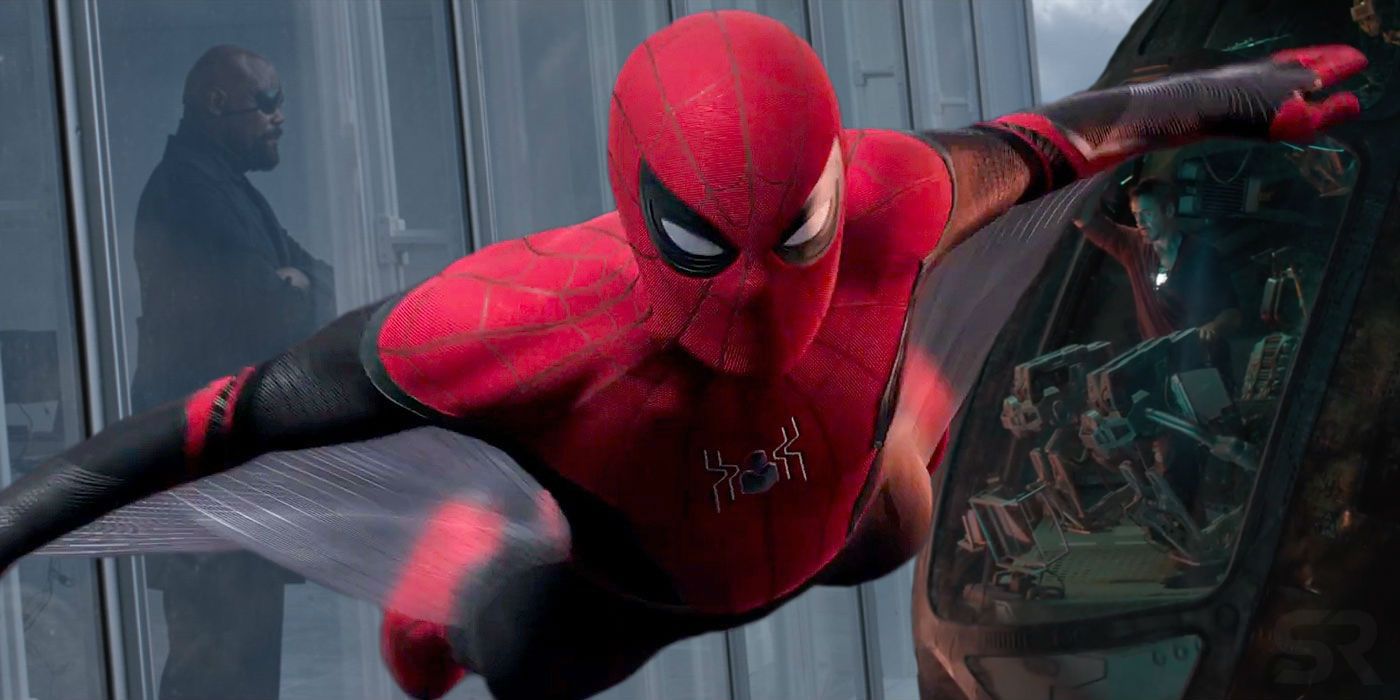 The first trailer for Spider-Man: Far From Home focuses entirely on selling audiences on Sony's Spider-Man sequel, but it also includes some possible details on what happens in Avengers: Endgame. Sony and Marvel Studios struck a deal in 2015 to bring Spider-Man into the Marvel Cinematic Universe, and it wasn't too long after that Tom Holland was cast as the third live-action Peter Parker. His first solo film, Spider-Man: Homecoming, was such a hit critically and financially in 2017 that Sony made plans to have a sequel release just two years later.

As great as that is for fans of the Spider-Man, it has made the end of Phase 3 and beginning of MCU's Phase 4 a bit more complicated. Marvel Studios had Avengers: Infinity War end with Thanos snapping his fingers and wiping out half of the universe's population. This included the apparent deaths of many MCU heroes, including Spider-Man. Marvel is doing their best to maintain the belief that Infinity War's characters did actually die, but it has been impossible to convey with Spider-Man: Far From Home coming out just a few months after Avengers: Endgame is released. Making matters even more complicated, the producers of the film have confirmed on multiple occasions that Far From Home picks up minutes after Avengers 4, and that he'll help show audiences how the MCU has changed.

This made the marketing for Far From Home a constant source of fear for fans who were worried that Sony could spoil Avengers: Endgame while promoting their own MCU film. Now that Spider-Man: Far From Home's first trailers are online, this doesn't appear to be too big of an issue - but there's still a few reveals about Avengers: Endgame that can be pulled from the footage.

After Iron Man (Robert Downey Jr.) played a pivotal part in Spider-Man: Homecoming, Sony and Marvel brought another major MCU character into Far From Home's story. Samuel L. Jackson will reprise his role as Nick Fury in the sequel, and he'll recruit Spider-Man during his European vacation. Fury wants Peter to help him and the "good guy" Mysterio (Jake Gyllenhaal) take down a group of villains known as The Elementals. As shown by Far From Home's trailer, Fury sneaks into the room Peter is staying in and surprises him with a visit - and the dialogue is key. Fury says, "So nice to finally meet you, Spider-Man." A shocked Peter responds by saying, "You're Nick Fury."

This is a big reveal for Avengers: Endgame because it indicates Fury and Spider-Man have never met, which could mean Fury is not involved in what will likely be the film's biggest scene; several Avengers: Endgame cast members have described a scene that will feature nearly every MCU character. The exact details of the scene are not known, but Sebastian Stan teased working with Michelle Pfeiffer and Michael Douglas and Letitia Wright said she loved worked with Chris Pratt. It's believed this is all connected to this "every character" scene - and notice how all of those mentioned were dusted by Thanos, just like Peter and Fury. If Avengers: Endgame does hold a scene with all of the MCU's heroes appearing together in some form, it is difficult to imagine Spider-Man not being included.

Related: Every Update You Need to Know About Avengers: Endgame

This would then mean that Fury is not going to be part of this scene, unless Far From Home explains the two never properly met. This could also potentially be chalked up to clever editing by Sony as Jackson isn't actually shown saying the first part of his line. But, Peter acts like he's ever seen Fury in person, let alone met him. Unless this entire exchange was filmed just for the trailer, Fury may not be part of this massive scene after all. Of course, this could be part of Sony's initiative to keep spoilers of Avengers: Endgame at bay.

Avengers Tower Is Damaged In Endgame

One of the highlights of the Spider-Man: Far From Home trailer was seeing Spider-Man swinging through the streets of New York, but the buildings behind him may actually be the most important. In the shot (pictured above), Spidey is checking his phone as he swings around the city and many MCU fans will recognize the buildings right behind him. Grand Central Station is clearly identifiable thanks to the MCU's redesign that features a statue of first responders from the Battle of New York in The Avengers at the top. Directly behind the station is where Stark Tower, later transformed into Avengers Tower, is located and the cranes, truss, and lifts indicate it is getting a remodel.

Since Far From Home takes place after the events of Avengers: Endgame, this could be a sign that the tower is damaged during the conclusion of Phase 3. It is not currently clear how, when, or where the Avengers will get their rematch against Thanos, but it's plausible that New York could once again be the central location. Even if that doesn't happen, the tower's need of an overhaul could still come as a result of something else in Endgame. As revealed in Homecoming, Tony Stark sold the Avengers building, so any repairs will be up to the new tenants to handle. It is also worth mentioning that the construction on the old Avengers Tower could just be the new owners remodeling the building to fit their own plans, such as adding an Oscorp or Baxter logo at the top instead of the Avengers' "A."

Spider-Man Is All Alone - So Where's Iron Man?

The focus for many upon the release of the trailer is to see what is featured in the marketing, but Far From Home's footage may also leave you wondering where Iron Man is during all of this. The part the raises the most questions is a line from Happy Hogan (Jon Favreau) that says, "You're all alone. You're friends are in trouble. What are you gonna do about it?" Happy says this while on a plane and all indications point to Peter being on the receiving end of Happy's mini-inspirational speech. Ever since Tony brought Peter under his wing, though, he has been a mentor and father figure to Peter. Happy was originally assigned to watch over Peter as an order from Mr. Stark, and with Peter being brought back to life, why wouldn't Tony be around to help at a moment's notice?

The simple explanation, as unfortunate as it may be for fans, is that Tony is no longer alive when Far From Home takes place. Peter is set to go on this European trip with his school and, by the looks of the trailer, he is ready to take a break from the superhero life. He doesn't even pack his Spider-Man suit; Aunt May has to pack it for him. Could it be that Peter's still mourning the loss of his mentor? Is the possible death of Iron Man (and other Avengers) the reason why reporters are flooding towards him at the charity event to ask questions? Will the loss of main MCU heroes be part of the reason why Fury turns to Spider-Man for help since none of his regular Avengers are around? The answer to all of these questions is likely yes and could be viewed as major pieces of evidence that points to how Avengers: Endgame will conclude with Iron Man's death.

Spider-Man has received several makeovers already in his short time with the MCU, but it appears he'll ditch his most recent look in Far From Home. Under the mentorship of Tony Stark, Peter quickly received an upgrade from his original homemade suit to the first Stark-made one. Since Tony is always tinkering though, he then created the Iron Spider suit for Peter to wear. Although he originally rejected the suit thinking it was a test, Peter did receive the nano-tech Iron Spider suit in Infinity War.

Based on Far From Home's trailer, though, it looks like Peter will not be putting on the Iron Spider suit in his sequel. He's wearing the traditional red and blue suit Stark made him during his time in New York, but a change will be made. He'll receive at least one, and maybe a second, new suit thanks to his new working relationship with Fury. The stealth suit looks to be a product of his work with the master spy, while the red and black suit may also be a small redesign by the organization Fury works for. If the Iron Spider suit is not in Far From Home, then it would appear that Endgame could be the final time Peter puts on the suit.

Related: Who Is Mysterio? Spider-Man: Far From Home's Villain Explained

All of these clues of Spider-Man: Far From Home dealing with the fallout to Avengers: Endgame are simply that, as the trailer doesn't want to show its hand too much. The marketing strategy for the sequel is to sell it as a sequel to Spider-Man: Homecoming first and foremost. At least for right now, Sony and Marvel aren't promoting Far From Home with the hook of "come see what happens in the MCU next after Endgame." This a smart choice to protect spoilers, but also keeps Far From Home's focus on Peter's story and not the larger events that could be at play.

For the trailer, Sony's being very careful not to reveal anything about the plot or placement either. There's no mention of Thanos' snap or any of the events in Infinity War or Endgame. Sony is keeping all the details about the film's placement vague and Peter's passport is a prime example of this. Regardless of whether it is simply a marketing trick or actually remains the same in Far From Home, Peter's passport does not list any years on it. The "Date of Issue" in particular would've revealed exactly when Far From Home takes place in the MCU timeline that has grown to be a bit confusing. By avoiding the specifics, Sony is saving themselves from having another "8 Years Later" incident, while also protecting possible Avengers: Endgame secrets in the meantime.

With Far From Home set to hit theaters after Avengers: Endgame, this marketing tactic to avoid connections between the two should continue for the next few months. Sony and Marvel Studios will likely change course, though, once Phase 3 ends to make sure audiences know Spider-Man: Far From Home kicks off the next phase of the MCU.