« Where Do I Know That Harry Potter Actor From? Their Best Muggle Roles
The Sims 4: 20 Things Fans Didn’t Know They Could Do » 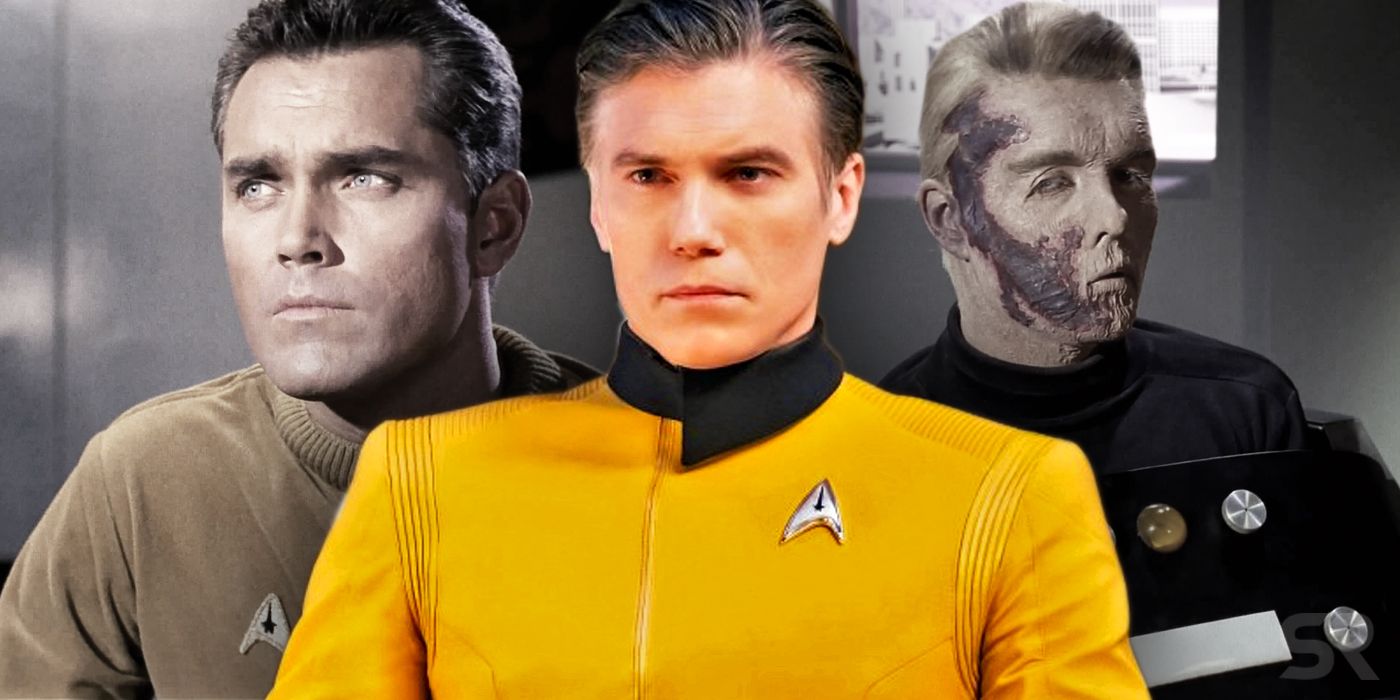 Who is Captain Pike, Star Trek Discovery's new commanding officer? One of Star Trek’s most well-known, yet least seen characters is about to get some new life; Captain Christopher Pike, Trek’s first Enterprise captain, will make his first appearance on Star Trek television in over 50 years as Anson Mount beams onto the Discovery during its season premiere.

Last season ended with Pike commandeering the Discovery at the tail end of the Star Trek: Discovery season finale, "Will You Take My Hand." We’ve since learned in teasers and trailers that Pike made the call to press Discovery into service investigating seven major energy disturbances that appeared throughout known space. Simultaneously, his science officer Spock has just taken a leave of absence to deal with extreme mental distress, likely triggered by the appearance of the anomalies.

Related: Star Trek: Discovery Everything That Happened Between Seasons 1 & 2

Mount is the fourth actor to portray Christopher Pike, but there’s very little information available to give the character background. That said, his appearances have been significant enough to warrant a pretty hallowed place in Star Trek canon. It’s hard to be the captain of a ship called Enterprise and earn anything less, but Pike's certainly lesser-known that Kirk or Picard. For those not as familiar with what to expect from Pike, here's a history of the character in all of his different iterations (excluding apocryphal books and whatnot).

Captain Pike Was The Star Of The Original Star Trek Pilot

When Star Trek premiered on NBC in 1966, the episode that aired wasn't the first pilot shot. The first pilot creator Gene Roddenberry presented to NBC was titled "The Cage" and it was markedly different from what would eventually get on the air. The uniforms were different, the plot was nearly devoid of action and the bridge crew was almost unrecognizable from the cast that would eventually be introduced to audiences in “The Man Trap.” There was no Uhura, Sulu, Chekov or Captain Kirk. Instead, Captain Christopher Pike (Jeffrey Hunter) led the Enterprise, aided by Leonard Nimoy’s Spock, John Hoyt’s Dr. Boyce and Majel Barret’s as yet unnamed first officer, Number One.

Kirk and Pike are vastly different characters from the off. Where Kirk is adventurous to the point of being rash, occasionally (something that makes his relationship with Spock so compelling), Pike is pensive and not a little troubled. "The Cage" opens with Enterprise Captain Christopher Pike in his quarters uncertain whether or not he wants to stay in Starfleet. He and the Enterprise had just recently come from a confrontation in which three crewmembers died and several more were injured. His responsibilities are weighing on him and he relays as much to the ship's doctor who prescribes him a martini. Pike doesn’t make a definitive decision before getting interrupted by a distress signal from a planet called Talos IV and eventually leading a landing party to the planet’s surface.

There he meets a beautiful woman named Vina, who claims to be a human born to crash survivors who’d arrived on Talos IV several years before. After a short while, she warns the captain that the Talosians have lured him there to use them as breeding stock for a new race of people. The Talosians are telepaths who've become too dependent on their immense power and need assistance rebuilding their planet after a nuclear holocaust. Once they learn of Vina’s betrayal, they reveal themselves to Pike and attempt to convince him to stay on Talos and mate with Vina using various means. Masters of illusion, they offer to make him whatever food he desires, change Vina’s appearance to whatever he wants and create whatever environment would make him happy. Pike resists until eventually help arrives in the form of Number One.

Related: Star Trek Movies And TV: What The Franchise's Future Looks Like

She beams down with another crewmember and saves the day by threatening to overload her phaser and kill the members of the landing party to thwart the Talosians' attempt to create a race of human slaves. The Talosians relent after realizing that humans hate captivity so much that they’d be way too much trouble to breed and put to work. But when the Enterprise crew gets ready to leave, Vina reveals she’ll be staying behind. Her beautiful appearance is another illusion created by the Talosians, who saved her from a previous shuttle crash, but were unable to do without disfiguring her. But no worries, the Talosians create an illusory Pike to be her companion and she lives out her days in ignorant bliss.

Unfortunately, NBC rejected the Star Trek pilot concluding that it was too cerebral and needed more action. It’s worth noting that Jeffrey Hunter had the option to stay and reshoot another Star Trek pilot, but declined to do so, preferring to pivot his career to film instead. A year later, Star Trek in its more familiar form premiered and the rest is history. But in a fun twist, Roddenberry fixed it so that wasn’t the last we’d see of Pike.

The next Star Trek pilot he served to NBC was “Where No Man Has Gone Before,” what would later become the third episode aired of the new series. Roddenberry intentionally set it 13 years after the events of "The Cage," and established Pike as the ship’s previous captain. Spock also maintained his experiences working with Pike who was introduced to audiences for the first time when the man himself was formally in the Star Trek season 1 two-part episode "The Menagerie".

In a twist of fate that would result in an award-winning story, Roddenberry discovered that he didn’t have enough episodes shot to meet the demand set by NBC, so he wound up reusing footage from “The Cage” as flashback footage in what would become the first half of "The Menagerie." The story followed Spock as he tried to return his now badly burned and completely disabled captain to the Talosians. Spock knew the race not only had the medical technology to help Pike live more comfortably, but they could also rid him of his disfigured appearance. Eventually, that's what happens, and Pike lives out the rest of his days with Vina, who's still there. The character didn’t appear in Star Trek after “The Menagerie,” until the 2009 J.J. Abrams movies, but his place in canon was cemented.

Related: Why Star Trek 4 Has Been Cancelled

When J.J. Abrams rebooted Star Trek in 2009, he pivoted from the original source material in a way that allowed him to create something new using a lot of familiar elements. By creating a separate "Kelvin timeline", he could redraw The Original Series and the history surrounding it. He reintroduced Christopher Pike as captain of the Enterprise and Kirk’s mentor, an inspired decision. Bruce Greenwood expanded the character far beyond what Hunter (and briefly Sean Kenney) had been allowed to.

Though the character’s life is tragically cut short at the beginning of Star Trek: Into Darkness, he remains one of Kirk’s most important influences in the first film and his death is what ignites Kirk and later Spock’s dogged chase of Khan Noonien Singh. Considering the literal truth is that we would not have Captain James T. Kirk as we know him without the actions of Jeffrey Hunter, the story mirrored real life in a touching and elegant way.

But even after that, one of Star Trek’s most enduring, yet least seen characters has found a way to new life once more.

Star Trek: Discovery ended its first season with a very bold choice – after finally subduing the Klingon Empire and ensuring the Federation would have peaceful times for the foreseeable future, the U.S.S. Discovery got en route to pick up its new, as yet unknown captain. Unfortunately, it was intercepted by the – wait for it – U.S.S. Enterprise. And not the any of the lame lettered ones, either – the real deal. And, just when you thought it couldn’t get any more OG, this is the Enterprise as commanded by Captain Christopher Pike (Spock is also assigned to the ship).

Because of Star Trek: Discovery’s position in the Trek timeline (ten years before the events of Star Trek: TOS), and because Captain Pike’s time on the Enterprise was so well fixed in canon, the show was perfectly set up to encounter Pike, Spock and other characters from "The Cage." While there’s no word on whether or not we’ll see Dr. Boyce, Rebecca Romijn will appear as first officer Number One. Number One’s addition to Discovery is a low-key win for a lot of Majel Barrett Roddenberry fans. While the reasons for the character’s elimination remain murky (rumors abound both about NBC’s unwillingness to have a woman in a command position and their supposed displeasure with Barrett herself, but nothing certain is known about why Number One got the ax), it was disappointing that such a groundbreaking female character was stopped in her tracks. It’s good she’s getting her own chance to evolve, despite the fact that it looks like Romijn plays a fairly small role in Star Trek: Discovery season 2. Most of the action will take place on the Discovery, and presumably Pike’s first officer will have stayed on board the Enterprise in his absence.

Pike will be played by Anson Mount (Inhumans) and it seems his Christopher Pike has moved beyond the ambivalence he had about staying Starfleet that we saw in "The Cage." He’s dogged in his mission to solve the mystery of the seven red signals that have attracted Starfleet’s attention, as well as firm in his commitment to helping Spock. He evokes Greenwood’s mentorship as well as Hunter’s pensive demeanor, but there’s something very unique about his interpretation of Pike that we’ll get to know during his time on Star Trek: Discovery.

More: How To Watch Star Trek: Discovery Season 2 (Anywhere In The World)