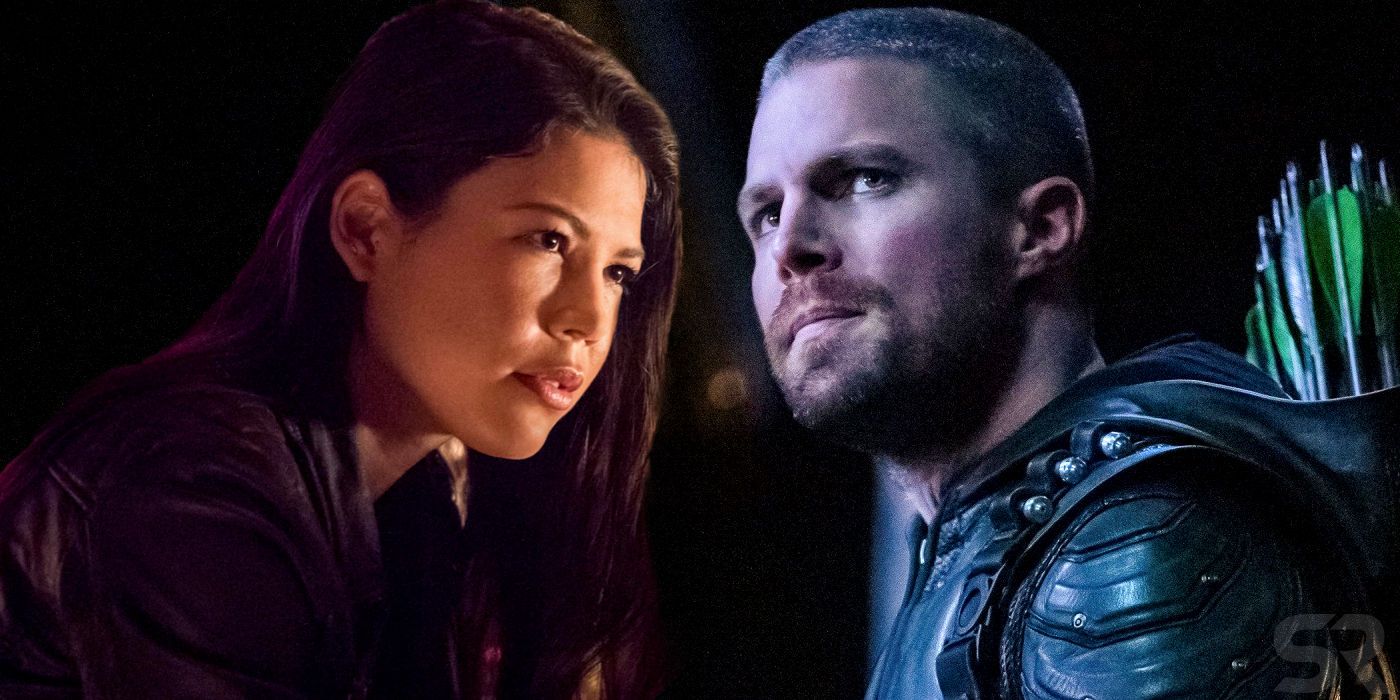 Her name may be Emiko Queen, but many fans of Arrow are wondering just who the new Green Arrow really is. While the new heroine has apparently been a part of the series since the start of the current season, viewers just recently learned her name and only know a fraction of her motivations and history.

The young woman known as Emiko Queen took up the mantle of the Green Arrow at the start of Arrow season 7, becoming the new protector of Star City after its other vigilantes were forced into retirement following Oliver Queen's imprisonment. Her face was revealed in the Arrow season 7 midseason finale, as well as the fact that she was the daughter of Robert Queen, Oliver's father.

It wasn't until the Arrow season 7 midseason premiere that a fan theory was confirmed and the new Green Arrow was officially recognized as Emiko, though it has yet to be explained how she was trained in the arts of archery, acrobatics, and urban tracking.

As Arrow season 7 began, Star City was in dire straits. Oliver Queen was in prison, his secret identity as the Green Arrow exposed after he agreed to plead guilty to a number of federal charges involving his vigilante activities. In exchange for this, the FBI agreed to help Star City's vigilantes take down crime boss Ricardo Diaz and not to prosecute the rest of Green Arrow's allies, provided they retire from vigilantism afterward. Unfortunately, with Star City's police department and local government reeling after the arrest of all the city officials and crooked cops on Diaz's payroll, the city was ill-equipped to handle the sudden rise in crime as the criminal population became emboldened.

Enter a new Green Arrow - one who seemed to focus their activities upon the ghetto known as the Glades and had no ties to Team Arrow. With the exception of Rene "Wild Dog" Ramirez, most of the city's defenders either ignored the new Green Arrow in favor of focusing on the hunt for the still-at-large Ricardo Diaz or were actively hunting the new Green Arrow, fearful that they might blow Team Arrow's plea bargain and bring the FBI down upon them all. Unsurprisingly, the new mayor of Star City, who lobbied for the office on an anti-vigilante platform, made the capture of the new Green Arrow the top priority of the SCPD and was quick to blame the new hero for any major crimes that were committed in Star City.

The mystery of the new Green Arrow's identity was a major subplot in the first half of Arrow season 7. She was first revealed as a woman in the opening scene of episode 8, "Unmasked." By the episode's end, she was revealed as an unknown daughter of Oliver Queen's father, Robert, as the final scene showed her talking to Robert Queen's tombstone and addressing him as "Dad."

With the revelation that the new Green Arrow was Oliver Queen's sister revealed, fans of the Green Arrow comics immediately suggested that this mystery woman must be the Arrowverse's version of Emiko Queen. In the current timeline of the DC Comics' universe, Emiko Queen is Oliver Queen's half-sister and currently fights crime as the Red Arrow. This theory was confirmed when it was announced that the mid-season premiere would be titled "My Name Is Emiko Queen." First appearing in Green Arrow #18 in 2013, Emiko was the daughter of Robert Queen and Shado. She was not raised by either of her biological parents, however, having been abducted as an infant by Simon Lacroix - a former business associate of Robert and, secretly, the assassin known as Kodomo. Kodomo raised Emiko as his own daughter and trained her in the arts of killing, honing her into a tool of his revenge upon both Robert and Shado.

Oliver would learn of Emiko's existence during The Outsiders War - a storyline in which Green Arrow was dragged into a feud involving a secret society of clans known as the Outsiders, who devoted themselves to the mastery of a single ancient weapon. Emiko learned of her true heritage and Kodomo's treachery during the war and killed Kodomo for what he had done. Afterward, she elected to follow Oliver Queen back to Star City, as she had nothing left for her in the society of the Outsiders and he was the only person involved in the whole incident who hadn't lied to her or tried to manipulate her towards his own ends. She threw herself into helping her half-brother with his crime-fighting activities, despite his insistence that she focus on trying to live a normal life. Oliver ultimately relented after she saved his life and Emiko took up the name of the Red Arrow.

Related: Is The Green Arrow Comic Cutting Its Ties To Arrow?

There is some irony in Emiko Queen being introduced into the world of Arrow, as the character was originally created so as to give the comic book version of Green Arrow a teen sidekick and half-sister like Thea Queen, who was created as an original character for Arrow. Adapting Emiko for the Arrowverse would require some changes, however, as the Arrowverse version of Shado was not an assassin. There was also no feasible way of this version of Shado having had an affair with Robert or a daughter who would now be old enough to be a teenager.

What Does Emiko Queen Want In Arrow Season 7?

Arrow season 7's midseason premiere, "My Name Is Emiko Queen," revealed Emiko to be the product of an affair between Robert and a woman named Kazumi Adachi. According to an old letter that Oliver discovered, his mother, Moira Queen, had discovered the affair and threatened to ruin Robert's reputation if he didn't abandon the woman he truly loved and their child. Robert confessed to the affair in the letter, which was written to his best friend Walter Steele, asking him to look after Kazumi and Emiko in the event of Robert's death. Moira had apparently discovered the letter as well, and made sure that Walter never got it, insuring that her rival would continue to live in poverty.

Though she was abandoned by her father and had a rough childhood growing up in the Glades, Emiko still seems to hold some level of respect for Robert, speaking to his tombstone reverentially. She also seems to have taken up Oliver's mantle as Green Arrow, at least in part, as a means of proving herself worthy of the Queen name. Her primary motivation, however, is solving the mystery of her mother's murder and bringing her killers to justice. Despite this, she is still a strong believer in justice, and has also taken up the cause of protecting the people of the Glades in the absence of a capable police force willing to confront the gangs that rule the worst part of Star City.

The Arrow midseason premiere opened with a montage of Emiko Queen training and hunting her prey. As she did this, we also saw her working her way through a small notebook with a list of names, crossing them out as she turned various figures over to the police. Oliver Queen did the exact same thing in Arrow season 1, though his list was given to him by his father, Robert, and listed various partners involved in a sinister project known only as the Undertaking.

Emiko's list was apparently self-written and lists people who were part of the conspiracy that killed her mother and then tried to cover-up the murder. Several of the names on the list were criminals who Emiko helped to bring to justice earlier in the season. Jason Stent, for instance, was a gun-runner whose operation Emiko shut down in Arrow season 7 premiere. The list also included Jon Cortez - an arsonist who Emiko helped Dinah Drake and Rene Ramirez to capture in the episode "Level Two."

Emiko's investigation revealed that Stent had sold the gun that had killed her mother and that Cortez and his team had started the fire that burned down her mother's apartment complex, which was meant to hide the fact that she'd been shot from a distance. Emiko tracked the bullet to a soldier of fortune named William Glenmorgan, who she believed had been the triggerman. Unfortunately, when she confronted Glenmorgan and subsequently investigated his alibi, she determined that someone had framed him. This leaves Emiko with two big questions - who truly did kill her mother, and why?

Will Emiko Replace Oliver As The Green Arrow?

Beyond Arrow season 7, many are wondering if Emiko might move on to take up her brother's mantle on a permanent basis. While Oliver Queen is now employed as a Deputy of the SCPD and still wearing his old costume without the mask, he doesn't seem to be answering to the Green Arrow name anymore. More, with Oliver now officially bound by the same rules and regulations as the police department, he has a lot less freedom to help the people of the Glades in the way that Emiko has been throughout the first half of Arrow season 7.

The question of Oliver Queen being replaced has weighed heavily upon the minds of many Arrow fans since the 2018 Arrowverse crossover event Elseworlds. It was revealed in the final chapter that Supergirl and Flash were destined to die saving the world from Dr. Destiny. Armed with this knowledge, Oliver confronted the cosmic being known as The Monitor and demanded that fate be rewritten because the circumstances that were forcing The Flash and Supergirl into a literal suicide run were not fair. The Monitor agreed but said that a price would have to be paid. We have yet to learn what that price is but given that the 2019 Arrowverse crossover event will be based on Crisis on Infinite Earths - a comic book event that ended in the deaths of Supergirl and The Flash - it is speculated that Oliver has either only delayed the inevitable or may have offered himself up in the place of his friends.

If this is the case, then Emiko may find herself thrust into the role of replacing Oliver as the Green Arrow for an entirely different reason. There are similar speculations that Superman may sacrifice himself to save his cousin, in order to assure that the Supergirl series can continue to run. While Emiko Queen seems to be more than capable of filling her brother's cowl so far, it remains to be seen if Arrow could continue without its main character.

More: How The Arrowverse Has Already Set Up Crisis On Infinite Earths