Why Ghostbusters 3 Took 31 Years To Make 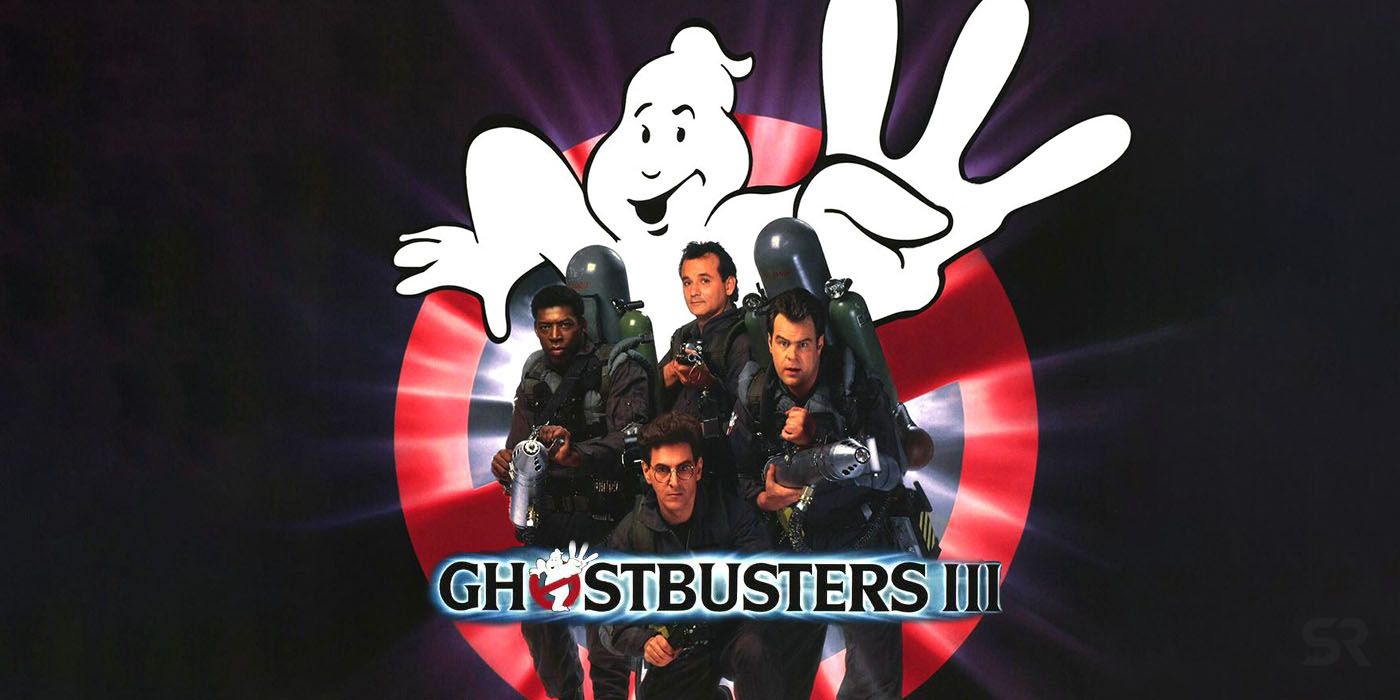 Despite the huge success of the original movies, it’s taken over 30 years for Ghostbusters 3 to arrive – so what was the holdup? The original Ghostbusters was a legitimate phenomenon back in 1984, gathering together a once-in-a-lifetime team of actors and filmmakers to produce something truly special. The film’s enormous success – not only at the box-office but through merchandise too – obviously raised questions of a sequel. But since none of the principal cast was initially interested in a Ghostbusters sequel, it took a while for a follow-up to happen.

In the meantime, animated series The Real Ghostbusters kept the franchise alive. That show combined surprisingly sharp comic writing with some atmospheric scares, and its success convinced the studio to push for a second movie. The team eventually reunited and started work on Ghostbusters II, even managing to convince a very reluctant Bill Murray to sign on. While the film proved to be another hit, it had the misfortune of coming out in a particularly crowded summer in 1989, releasing around the same time as Tim Burton’s Batman, Indiana Jones And The Last Crusade, Lethal Weapon 2 and others, so it grossed significantly less than the original.

The general consensus on Ghostbusters II is that it was too much of a retread of the original, and by coming out five years later, it took too long to capitalize on the first film's success. Ghostbusters remained an iconic brand regardless, but despite many attempts in the years that followed, a third movie proved almost impossible to organize. The death of co-star and writer Harold Ramis in 2014 seemed to put an end to any thought of a direct sequel, leading to Paul Feig’s 2016 reboot.

Feig’s movie ultimately didn’t meet the studio’s financial expectations, so the series stalled for a few years. Fans were stunned this week when it was announced that not only was Jason Reitman directing a new Ghostbusters but that it would be a sequel to the original movies too. Ghostbusters 3 is a project with something of a tortured history, so let’s take a look back and see why it took 31 years to finally come together.

Ghostbusters is really the brainchild of Dan Aykroyd, who wrote the original script and plays Ray Stantz in both movies. The franchise lets him mine his fascination with science and the occult into one big potpourri, and if anyone has been keeping the flag flying for Ghostbusters 3, it's him. His first crack at a script for the third movie is the most famous among the fanbase and can be summed up neatly as the Ghostbusters go to hell. Ghostbusters III: Hellbent found the team heading into a mirror version of Manhattan – dubbed Manhelltan – once it starts spewing out ghosts due to overcrowding. The gang would have met their evil mirror versions and gone up against The Devil - a Donald Trump-like figure named Luke Silfer.

Apparently, a couple of different drafts were produced; one with the original team and another introducing a new, younger generation with Ray, Egon and Winston in supporting roles. Bill Murray wasn’t particularly enthused but reportedly agreed to cameo. Harold Ramis stated the dream plan was he would direct Hellbent while they had Ben Stiller and Chris Rock in mind for the younger Ghostbusters; Aykroyd also thought Alec Baldwin would be great as the villain. Aykroyd would later reveal the studio wasn’t interested in producing such a pricey concept. There were plans to resurrect the concept for a CG animated movie around 2008 since the ever-reluctant Murray was more willing to return for a voiceover, but it never came to be.

Related: The Real Ghostbusters 3 Already Happened In 2019 (And It Was Perfect)

However, the cast did return for Ghostbusters: The Video Game, which was a loving ode to the franchise that was let down by some flawed gameplay. Many fans consider it the third movie that never happened regardless. Working on the game reignited some nostalgia in Murray, and he later admitted he was more open to a Ghostbusters 3 afterwards. It was around this time screenwriters Gene Stupnitsky and Lee Eisenberg began work on a new script for Ghostbusters 3. The duo had written Harold Ramis comedy Year One, and the project was very much intended as a passing of the torch. Little is known about the plot of this version, other than Peter Venkman dying in the first act and later reappearing as a ghost, and his adopted son Oscar becoming a Ghostbuster. Ray and Egon would have played key supporting roles, with poor Ray having gone blind in one eye and neither of them able to carry a proton pack. The script also centred on four new recruits, with three guys and one woman.

By 2013 Ivan Reitman was set to return as director of the third movie and pitched Sony on a script called Ghostbusters: Alive Again. Written by Etan Cohen (Holmes & Watson), this draft once again featured Venkman quickly dying and becoming a ghost, while a group of Columbia students end up taking the Ghostbusters mantle. Venkman would have had a son named Chris, with Charlie Day and Jesse Eisenberg in line to play the role. Zack Galifianakis, Rebel Wilson and Jonah Hill were being considered for the rest of the team, with Sacha Baron Cohen being eyed for villain duties. Development was going well on this version until Harold Ramis became ill and sadly passed away in 2014. Reitman decided to step down following this, as he felt he couldn’t make a new sequel without the original four team members. After that, work soon began on an all-female reboot.

Page 2: The Bill Murray Roadblock & Why Ghostbusters 3 Is Happening Now

Bill Murray’s Reluctance To Return Was Always A Barrier

It would be wrong to say Bill Murray was the sole hold-up over Ghostbusters 3, but his sequel aversion was certainly an issue. In a way, it was lucky the studio even managed to convince him to make Ghostbusters II. Murray had actually been pitched on a completely different idea for the second movie that involved Dana (Sigourney Weaver) being kidnapped and taken to Scotland, which had a huge underground civilization. Murray dubbed this version The Last Of The Ghostbusters – specially to rule out a third movie – but once he’d signed on, the concept changed completely. Murray later admitted he found the experience unsatisfying, despite feeling the sequel had some funny scenes. He also felt the effects overwhelmed the story.

In the years that followed - except that brief period where he enjoyed voicing the game - Murray rarely expressed excitement about another movie. When Sony started seriously developing Ghostbusters 3 with the Stupnitsky and Eisenberg draft, Murray already seemed to regret stating he was open to another sequel. Sony didn’t want to make it without his involvement, but he would neither commit to an appearance or – reportedly – read the drafts he was sent. In an interview with David Letterman, he’d even call talk of a third film his ‘nightmare.’

Murray’s real issue was his belief another movie couldn’t possibly top the original, and it was merely being made to keep the franchise alive. He also felt the cast was too old to be running after ghosts. When Ghostbusters 3 was finally scrapped, Murray would eventually cameo as a new character in Feig’s Ghostbusters reboot, where he’s quickly killed off – presumably to rule out a sequel return.

The 2016 Ghostbusters proved to be expensive to produce, and the film’s underperformance led to sequel plans being canceled. Ivan Reitman teased an animated spinoff was in development following the movie but little has been heard about that project recently, and many assumed the franchise was on hold. It came as a major shock when it was revealed Jason Reitman would direct Ghostbusters 3, which is aiming for a Summer 2020 release. The story apparently revolves around four teens – two boys and two girls – who become Ghostbusters. Dan Aykroyd actually spoiled this reveal back in November, but given his history of crying wolf with the third movie, nobody really believed him.

So why is it happening now? Well for one, Ghostbusters is simply too valuable an IP to let sit on the shelf for another 25 years. Following the surprise success of their Jumanji reboot, Sony is currently in the process of dusting off a lot of old favorites including Men In Black International and Bad Boys For Lif3. For another, it took a lot of untangling to actually get the 2016 Ghostbusters made, so while the resulting film didn’t hit the numbers the studio hoped for, a new revival still has the potential to kickstart a new series. Legacy sequels have also become a hot trend, and many felt that one of the biggest missteps of the 2016 movie was to be a complete reboot. Hiring Jason Reitman sends the clear message this will be a true legacy movie, and while returning cast haven’t been announced yet, Aykroyd and Ernie Hudson at least feel like safe bets.

Curiously enough, a recent report suggested Aykroyd and Murray are pairing together for a cameo in Zombieland 2, another Sony project, so perhaps a return appearance by Dr Venkman in Ghostbusters 3 isn’t just a pipe dream this time.

This entry was posted by Screen Rant on January 19, 2019 at 12:01 pm, and is filed under TV News. Follow any responses to this post through RSS 2.0. You can skip to the end and leave a response. Pinging is currently not allowed.