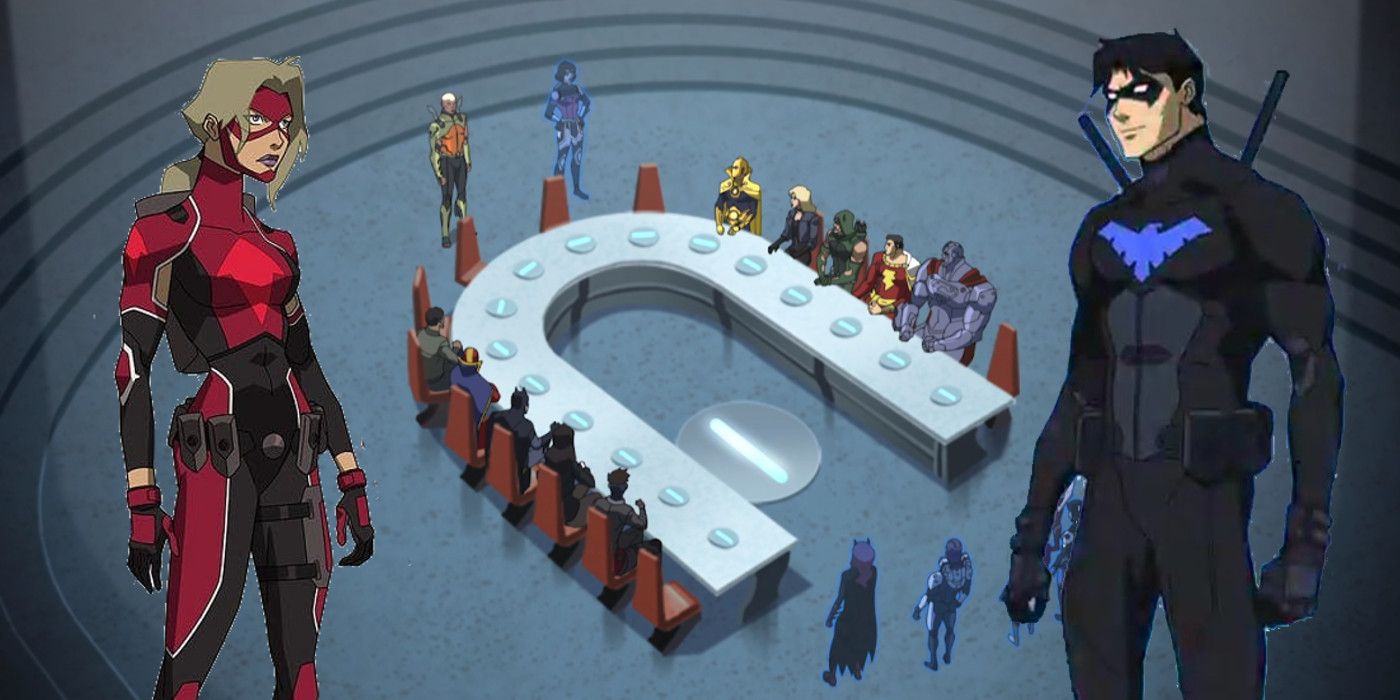 Young Justice: Outsiders has changed the face of its universe in a big way, with six separate superhero groups now working together in secret to fight the villainous group known as The Light. The cast of Young Justice features dozens of characters, with more being introduced each season. This leads to a lot of changes in the various team line-ups, even ignoring the years that pass in-universe between seasons.

The third season premiere opened with a mass defection, as several superheroes led by Batman resigned from the Justice League due to their dissatisfaction with how the team was addressing the issue of metahuman trafficking. However, it was later revealed in episode 8, "Triptych", that the resignations were a ruse and that Batman, Nightwing, and Robin were still in contact with the rest of the Justice League's leadership. Now the Justice League has been secretly broken into six teams, all coordinated by master-hacker and strategist Oracle, tackling the operations of The Light from multiple angles.

The following breakdown will profile every individual member of the six hero teams that have formed or changed membership so far on Young Justice: Outsiders.  In the case of newer characters (like The Spoiler and Orphan) who have not had their backgrounds explored on the show yet, their backstories in the comics have been briefly described. It is hoped that this will give fans of the show who aren't that comic savvy some insight into these new heroes.

In order to repel an invasion by the alien Appellaxians, seven heroes joined forces to save the world. Realizing there was strength in numbers, they formed a Justice League to organize the superheroes of Earth into one body that could fight for truth and justice on a global scale. Now overseen by the United Nations, the League's ranks stand diminished as half of the team is working off-world and half of the League members on Earth publicly resigned in the wake of increasing bureaucracy limiting their ability to do good.

Led by Wonder Woman, this group of superheroes is functionally a separate team despite officially being made up of Justice League members. Traveling into deep space following a psychic attack that caused several of their members to become mind-controlled into attacking the planet Rimbor, these heroes work to repair the reputation of the Justice League by fighting crime on an intergalactic scale.

It is presumed that the other Green Lanterns of Earth - Hal Jordan and Guy Gardener - are part of this team. This is due to a reference Vandal Savage made in episode 7, about the Green Lantern Corps being occupied with fighting both The Reach and the New Gods of Apokolips. Captain Atom, Hawkman, Hawkwoman, Icon and The Atom are also presumably part of this team, due to their absence at the meeting of all the Justice League members on Earth in the season premiere.

Mockingly referred to as "Batman Inc." by Black Lightning, when Batman tried to recruit him after he quit the Justice League for different reasons, it has been confirmed that Batman has begun leading a new team of heroes in the wake of his public resignation from the Justice League. The exact membership has yet to be confirmed, but it is presumed that the rest of the Justice League members who resigned along with Batman are part of this group.

Related: 20 Things That Make No Sense About Young Justice

Page 3: The Outsiders, "The Team," and Robin's Squad

The chief focus of Young Justice: Outsiders, this team was formed following a covert mission organized by Nightwing to go after a metahuman trafficking ring in the nation of Markovia. His hand-picked team came back larger, as they took on the exiled Markovian prince Brion, an amnesiac young refugee dubbed Halo and the outcast bug-boy Forager.

Originally made up of the teen proteges of various Justice League members, this group of young heroes was never given an official title like Teen Titans and is usually just called The Team. Their ranks were also diminished by the recent split, though not so severely as the core Justice League.

Led by Robin and largely made up of the teen sidekicks of other Justice League members who resigned from the team, this group of non-powered but highly trained teen heroes utilize stealth, combat training and advanced technology in the battle against metahuman trafficking.