Bird Box Pitch Meeting: The Blind Side Of The Apocalypse 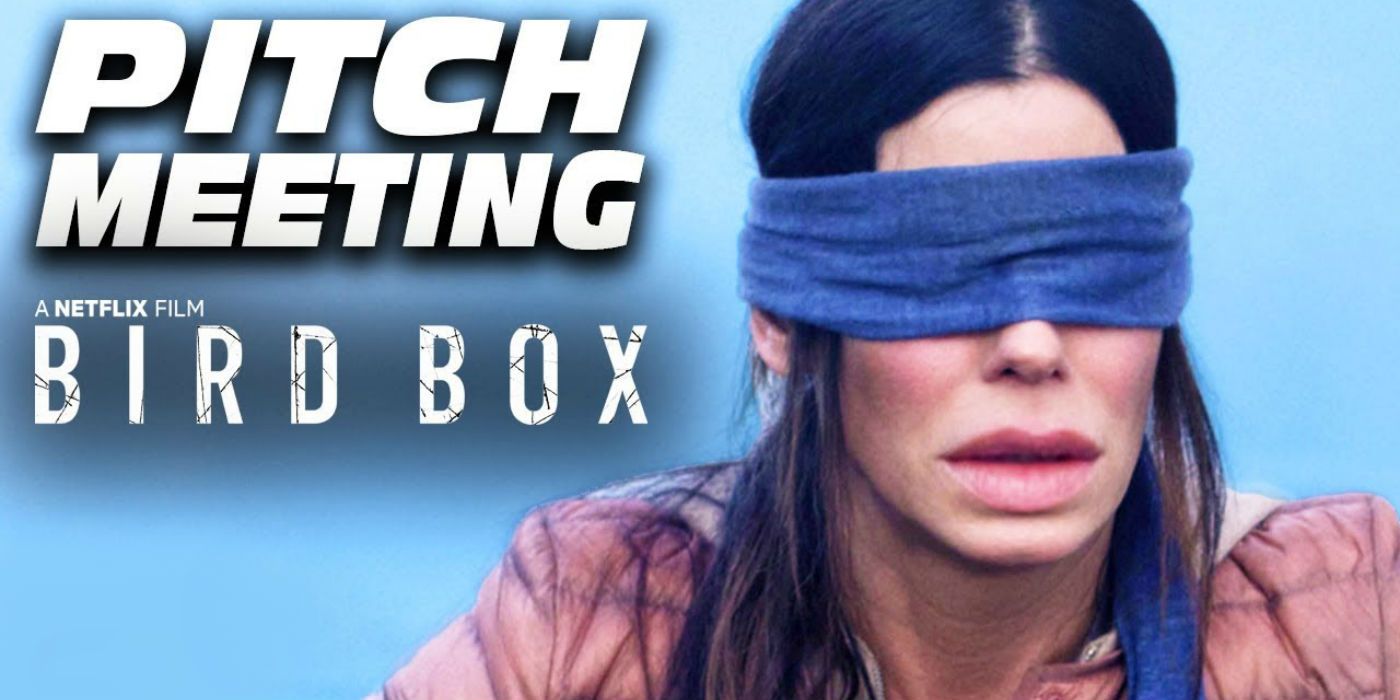 Netflix's post-apocalyptic thriller Bird Box is such a hit that it's generated its own meme culture, so Screen Rant's Ryan George is here to show us what (probably) happened in the original pitch meeting for the movie. Bird Box stars Sandra Bullock as Malorie, a woman who finds herself fighting to survive in a world infested with monsters that drive anyone who sees them to suicide.

Well... almost anyone. The criminally insane don't kill themselves upon seeing the monsters, but instead become their devoted disciples and go to great lengths to try and force others to look at the monsters as well. In order to stay alive, Malorie and her fellow survivors stay barricaded inside a house (fortunately the monsters are polite and won't go into people's houses), and only go outside wearing blindfolds.

Bird Box jumps around in time between Malorie in the future, trying to guide two small children safely down a river to possible sanctuary, and to the start of the monster outbreak, which explains how she ended up with two small children. To give credit where it's due, the title of the movie is definitely not misleading; within the first few minutes of Bird Box there are literal birds in a literal box. As for the rest of it... well, we'll let Ryan explain.

Though Bird Box has been accused of being a rip-off of A Quiet Place (as mentioned in the video, there are a lot of similarities), the book upon which Bird Box is based actually came out long before A Quiet Place. The debut novel by writer Josh Malerman was released in 2014, and the movie adapts the book pretty closely, with a few minor changes (for example, in the book some at the sanctuary have intentionally blinded themselves in order to be safe from the monsters). Malerman has also written a number of other novels and novella collections, including Unbury Carol, Black Mad Wheel, and A House At The Bottom Of A Lake.

Bird Box was reportedly viewed by more than 26 million Netflix subscribers within the first week of its release, and the movie's popularity led to a phenomenon called "Bird Box Challenge," in which people tried to do everyday tasks while blindfolded. Unfortunately, one person tried recreate a scene in which characters block out the windows of a car and drive to a destination using GPS and collision warnings only, and ended up crashing their car.

So, as fun as Malorie's adventures in Bird Box might seem, please don't try them at home.