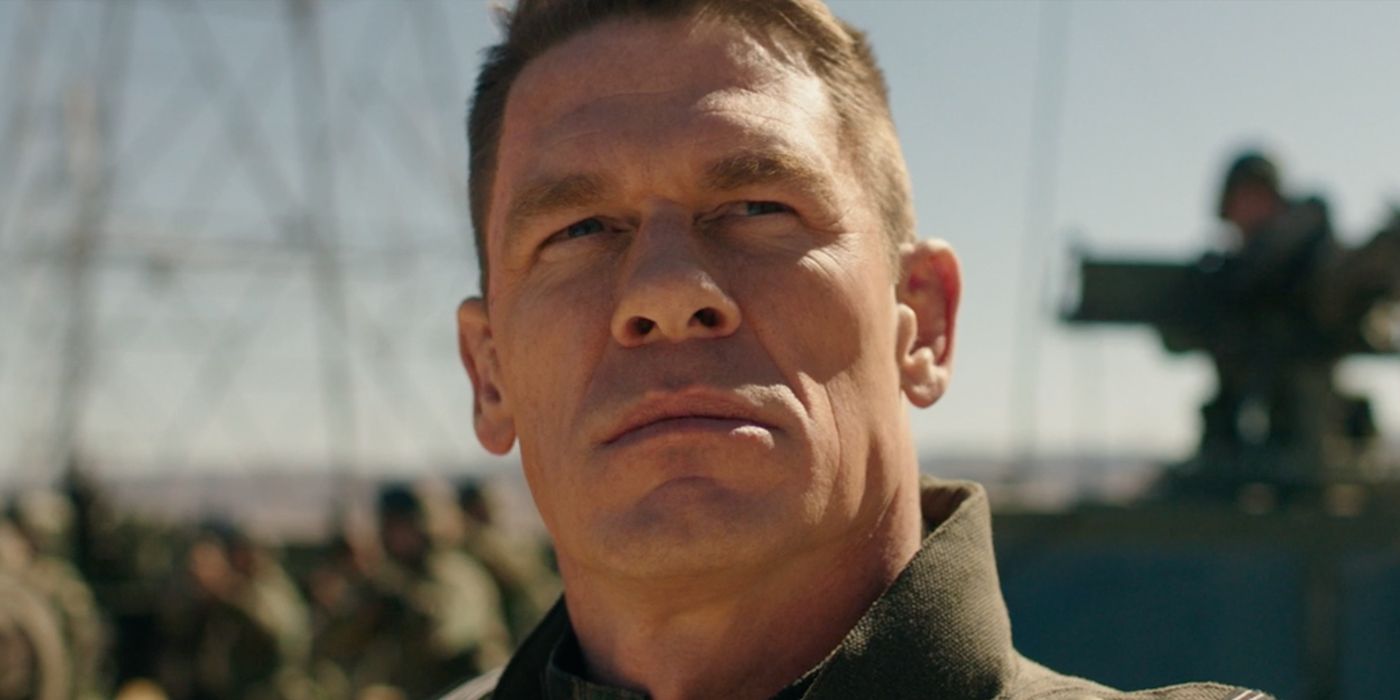 Outta nowhere, Bumblebee has become one of the holiday season's most beloved films, and at its humorous core is John Cena. The wrestler has taken an unexpected route into movies compared to some of his predecessors, with a breakout turn in Trainwreck making way for a slew of comedy roles. This is, surprisingly, also true of Agent Burns, the Sector Seven goon Cena plays in Bumblebee; although the antagonist for much of the film, he's made likable by a deft sense of humor.

This is what Screen Rant discussed when we sat down with Cena to discuss Bumblebee, along with how the movie evolved during production, where he sees the character going in the future, and what the box office really means.

This is a movie unlike anything else you've really done before - the scale, the characters. What surprised you the most about it?

I mean, we're in the creative profession and all they're asking me to do is use your imagination. And I know everybody's methods are different and for some it may be difficult to imagine this transforming robot from a stick on a ball, but I didn't have any problems with it. I really thought the environment was awesome because everyone on set, people who'd worked on Transformers in the past, everyone was comfortable with that environment and noone made you feel stupid for acting out these scenes with a PVC pipe and a tennis ball.

Your character, Burns, was originally reported as a proper villain in the story. The role you have in Sector Seven is definitely as an antagonist, but he's so likable from the very start and at the end does the right thing. What was the character like when you first read for it? Did anything change during the process?

Hats off to Travis for being observant. It was written pretty straightforward and we began to perform it pretty straightforward. And like I said, Travis was extremely prepared and I do my best every day to be prepared as well. So a lot of these times we would have these giant setups and Travis would have what he wanted in two takes, and he would just come out from behind the curtain and be like "hey man, why don't you just go for one". And that's all I needed to hear. I usually try to take those moments to make the crew laugh or have fun for myself, because I'm given that one take. But a lot of that, he really observed that, "Hey, I can't use what you just said in the movie, but I can use your sentiment in the movie. So give me the same tone, just don't curse as much." And that's kinda where we got the mold for the new Agent Burns.

You've done quite a lot of comedy stuff - last year's Blockers was a riot - and you get some great jokes in this. How many were written in the script and how much can from this collaborative process?

Well, because the character was pretty straightforward at the start, none of it came from the script. It was all a collaboration. Everybody watching and seeing and like, "Hey, I don't know if this will make the movie but at least we have it." And it was interesting to see a lot of the comedy making the movie. The movie is action-packed, but as an entire body of work, the movie is light-hearted as well. There's a lot of comedic scenes between Hailee and Bumblebee, Hailee and George as well. I think the movie as might have in its construction, Travis might have looked at all the footage and realized he has a very nice, light-hearted piece.

There have been reports of a scene shot with Megatron in the Hoover Dam that you were involved. Could you talk about it?

No, that never happened.

I love the fact that there are rumors about that because that means people are interested, still, meaning hopefully we can make another one. But, no, that never happened.

Were there any scenes you were in that didn't make the final cut you wish had?

No, no man. They were overly gracious putting so much stuff in the movie. This was one where I really, I enjoyed reading it, enjoyed performing it, never thought the stuff that was on screen would make the movie, was happy to see, and again, happy to find out that critics and audiences like it. I don't know how many of these I'll have in my acting career, but I'm very proud of this movie and very proud that everybody who seems to see it feels the same way.

Speaking of other movies, do you see a future for yourself in the Transformers universe?

Oh no, of course. I don't really make decisions based on the name of a product, it's much more about the product itself. Like I said, I was drawn to Bumblebee for the story, not because it was a Transformers movie. It was a good movie and in the script, so, if they do decide to do another one, and the story is good, then I'm all for it.

Where would you like to take Burns from here? You have a proper good guy on the side of the Autobots now.

Well, you can loosely follow the path of the evolution of Sector Seven which could be fun. But at the same time, every movie does need a good bad guy. You never know. I think it's wide open because of the amount of time between this movie set in the 80s and this installment of Transformers, it really is an open playing field. I've been asked journalists, is your character the foundation of G.I. Joe. I think, even the concept of that, that's a hell of a story if you want to tell it. But, that's not up to me. That's up to the creative minds who hand me that book that I'd read and say, "Well, I like this, I'd like to be part of it." The cool thing, I think, is there's options. And that's something great, and I don't think one direction is definite, so we'll see.

You mention the G.I. Joe theory which has been around pretty much since you were cast, and has been really stoked by the fact your character's called "Agent Burns". No first name, mysterious past. Did you discuss with Travis or anyone what your full name is? Anything more than being the mysterious Sector Seven guy?

No, especially because of the way it was written. It was very straightforward, almost like the Dragnet guys. That's kinda how it was written. And like I said, from there, I was lucky enough to get a few free takes and a lot of that stuff made the movie. So it's a weird combination of, you have this mysterious character, but in the script it makes perfect sense. Then you decide to give him a little bit of a dynamic personality profile and now it's more intriguing. That's a good problem, when people want to know more about your character, that's a really good problem to have.

One of the saddest things about the movie has been that the box office is rather slow. It's got really good legs but it's not running at the same pace as other entries. I wonder if you have any thoughts on that. Do you feel a different release window, away from all this competition, would have helped the movie?

I don't think... you could speculate that this would have been a better week or that would have been a better month. I'm all for when we came out, and I'm all for... we really didn't spend as much as they did on the other Transformers movies. The movies that do well financially for the studio, I think you can always do better. And if people feel we could have done better, the only way to fix that is to go back, look at the information and try to come up with some logical answers. But I'm very glad with how we're doing and we're remaining consistent and still a healthy box office week after week after week. There's always going to be competition. In the world of WWE, there's always something that can take... they can give a consumer another way to buy a ticket. So I'm used to a very competitive atmosphere and I don't... you never want to... you never don't want competition. I think competition is good for all movies, and it's good for moviegoers. So I'm very happy with what it's done.

This entry was posted by Screen Rant on January 11, 2019 at 5:01 am, and is filed under Interviews, TV News. Follow any responses to this post through RSS 2.0. You can skip to the end and leave a response. Pinging is currently not allowed.