Glass Needs A Sequel: What’s Next For The Unbreakable Universe? 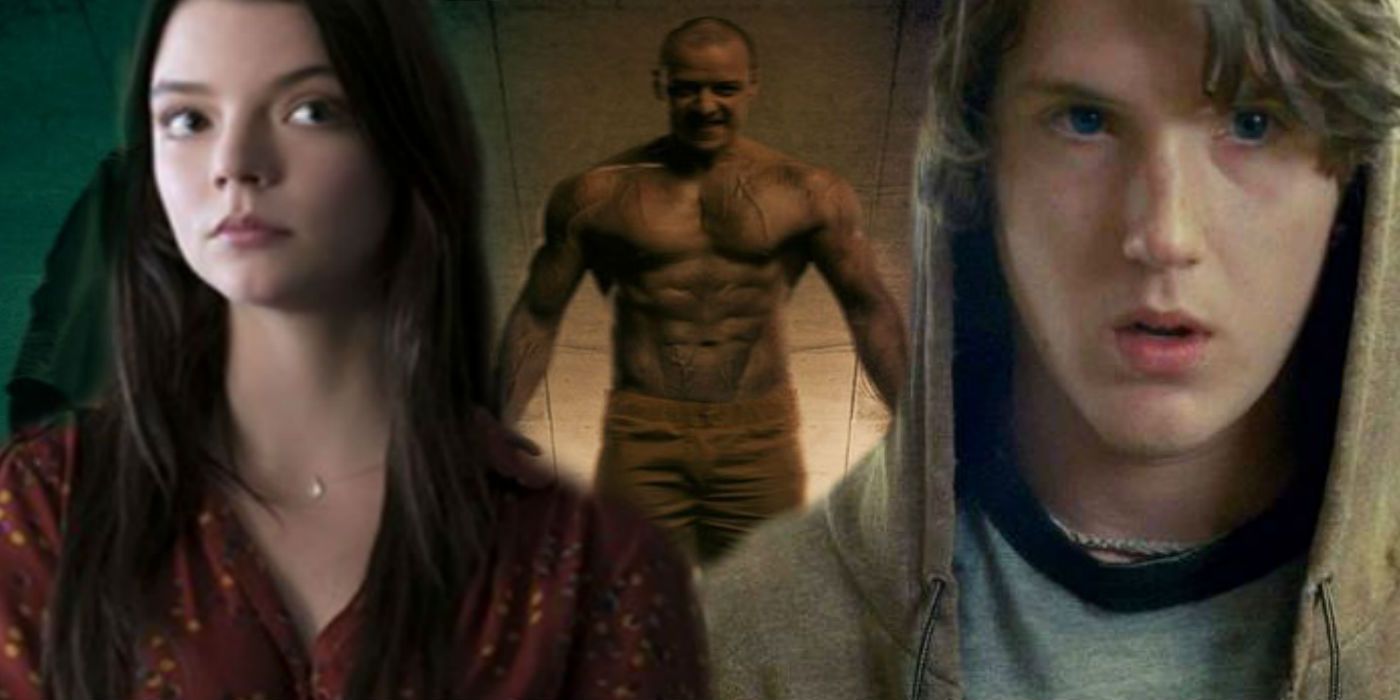 Glass forms the third in a loose trilogy of M. Night Shyamalan films - but what should happen next in the Unbreakable universe? Although it might look as though Shyamalan is just jumping on the shared universe bandwagon, in truth he always knew that Bruce Willis' David Dunn and James McAvoy's Beast were destined to collide. In fact, Shyamalan has actually confirmed that The Horde was originally part of the script for Unbreakable in the first place. He ultimately decided the idea didn't fit with the narrative he wanted to tell. "Whenever you raise the stakes, you can’t unraise them," he explained "So once you introduce girls being abducted, there’s a ticking clock that doesn’t allow for the breadth of character development that I wanted to do in Unbreakable with David, his wife, and his kid."

When Shyamalan did eventually decide to explore the idea of The Horde and The Beast in Split, he deliberately avoided marketing it as a sequel. In fact, even James McAvoy himself didn't get that it was a sequel; he overlooked the critical scene in the script, and the film was partway through production before he worked it out.

According to Shyamalan, this is the end of the tale he began with Unbreakable, which he refers to as the "Eastrail 177 Trilogy." For all that's the case, though, the fact remains that the titular Mr. Glass considered it an "origin story" - a tale of how he transformed the world, and unleashed superhumans across the face of the planet. Glass ends with a whole new status quo that would surely transform the entire human race, and it's quite possible Shyamalan will decide to explore it.

First of all, it's crucial to note that the original Unbreakable story is well and truly over; all the main protagonists (and antagonists) are dead. Mr. Glass' body was crushed by The Beast, and he died in pain - a tragically ironic end to his story, given his whole life was plagued by those desperately brittle bones. David Dunn was drowned, again an ironic end given water was always his one weakness. And The Horde was killed by a sniper's bullet, dying in the arms of the one girl The Beast released. Their stories have all come to a close.

The secondary characters are all still alive, though, and they're never going to forget everything they've experienced. No mother can forget her son, so Mrs. Price will always remember Elijah. Joseph Dunn knew that his father was a hero, and came close to piecing together the truth about Clover; he's also well aware that his father was an innocent man who simply tried to do what's right, and was murdered for it. And finally Casey Cooke was willing to enter The Horde's world, and proved the only one who could reach the real Kevin. She probably even blames herself for Kevin's death, given she was the one who'd triggered the transformation that made him vulnerable to a sniper shot.

Perhaps the most interesting of these three secondary characters is Joseph. The Eastrail 177 Trilogy imagines that comics are a window into a hidden world where people really do have super-powers, and if that's the case there's often a generational aspect to these superhuman abilities. Spider-Man's daughter Mayday becomes Spider-Girl, Superman's son Jonathan is Superboy, the Flash's daughter Nora is the super-speedster XS. It would hardly be a surprise if Joseph has inherited the unique mutation that gives a person the potential for super-powers, and it's not inconceivable that the trauma associated with his father's death could serve as a trigger for these abilities.

According to Glass, for 10,000 years the world has been policed by a secret organization - Clover - who have kept a cautious eye out for humans who possess extraordinary powers. In the present day, Clover had settled on a three-tier strategy to keep the superhumans down. Firstly, they would capture and institutionalize them, with a Clover agent overseeing their care and attempting to persuade them these abilities are just a delusion. If that approach is unsuccessful, Clover has developed a procedure that allows them to target the brain abnormality that grants super-powers and cut into it, essentially deactivating them. Finally, if all else fails, Clover has these superhumans killed. In their view, they're doing this for altruistic reasons; they've noted that heroes and villains tend to come into being together. Where there is a hero, villains arise to oppose him; where there are villains, heroes are born to defeat them. The problem here is that matters simply continue to escalate, as demonstrated in the Eastrail 177 Trilogy. Mr. Glass created his own opponent, David Dunn, and was defeated; but with Mr. Glass under care, nature abhors a vacuum and a new monster was ultimately created to become David's new foe.

This idea of escalation is a common part of comic book mythology, and is particularly notable in the Batman universe; even the MCU has made a nod to it, with Vision supporting the Sokovia Accords in Captain America: Civil War because "our very strength invites challenge.")

But the secret is out. Jonathan, Casey, and Mrs. Price have released all the security footage from the asylum online. It shows two people performing clearly impossible feats, and even being executed for it; significantly, it will also show Dr. Staple's face. While many will discount the footage, believing it to be fake, how many other people had Dr. Staple previously worked with? There will presumably be countless other superhumans who believed they were simply delusional after being treated by Dr. Staple, and they'll suddenly be questioning that story, perhaps rejecting it outright and accepting their powers. Meanwhile, others who were subjected to laser surgery will recognize the procedure Mr. Glass was (almost) subjected to, and will go public about it. With all this going on, Clover will also find themselves struggling to deal with public pressure to perform autopsies on the three corpses - forensic evidence would support the footage, suggesting that David was dragged to a pool and drowned.

Page 2 of 2: Will There Be A Glass Sequel, And What Would It Be About?

Why There Probably Won't Be A Glass Sequel

There's clearly potential for more stories set in the world of the Eastrail 177 Trilogy. But will they actually happen? That seems unlikely at this stage, not least because Shyamalan himself is reluctant. As he explained back in December:

"I don't want to relive stuff and I don't want to be an opportunist, that's not the relationship that I have with the audience, that I aspire to. My aspiration is they know they're going to get an original thriller every single time. That's where my taste go, so I'm going to say no right now."

Related: How Much Did Glass Cost To Make?

More recent interviews have seen Shyamalan insist that he's not going to try to build a spectacular world of superheroes. "That's not interesting to me," he told IndieWire, "There’s no danger in that... For me, my weapon isn’t matching pyrotechnics against pyrotechnics. I’m just not good at it!"

It is possible that strong box office performance would lead to Universal pressuring the director to extend his shared cinematic universe, but that doesn't seem to be particularly likely; latest Glass box office projections are below the original estimates. Besides, all the evidence suggests Shyamalan himself would be resistant to the idea. Where franchises like Transformers can live on without Michael Bay, in the case of original stories like the Eastrail 177 Trilogy, the story can only continue with Shyamalan's blessing. The controversial director doesn't like the idea of other people playing in his sandbox, and he's deliberately retained the sequel rights for most of his movies.

What A Glass Sequel Story Could Be

Still, let's imagine a scenario where Shyamalan either chooses to produce a Glass sequel, or gives his blessing for one. What would the story look like? There are three major possibilities. The first is that it could conceivably focus in on Spencer Treat Clark's Joseph Dunn and Anya Taylor-Joy's Casey Cooke. As noted, comics have long exploited the idea of "Legacies," with super-powers passed from one generation to the next. It's entirely possible that his father's death could serve as a trigger for Joseph to develop abilities of his own, and it's pretty clear he'd choose to use those powers as a vigilante. Meanwhile, another common comic book trope is that the death of one hero or villain can serve as inspiration for another; Casey has experienced some pretty horrific things, and cried as she held Kevin Crumb's dying body. She's unlikely to just go back to a normal life.

Alternatively, a sequel could focus on brand new characters in a totally different location. Perhaps it could center on one of the people Dr. Staple had previously treated, who she had talked into believing they never had super-powers at all. The footage going around social media would undoubtedly lead to them questioning her narrative, and they'd be left struggling to separate fact from fantasy. Should they decide to use their powers, these established laws of escalation would trigger once again, and a hero or villain would rise up to oppose them. Against all this, Clover would rush in to try to calm things down - but this time the superhumans would know they were coming. It's possible the conflict would wind up taking place in public, continuing the process of revealing the truth to the world.

A third approach could focus in, not upon the superhumans, but upon Dr. Staple as she attempts to deal with the unfolding crisis. She was completely outsmarted by Mr. Glass, and is sure to be part of Clover's attempts to limit the damage, meaning she'll be traveling from one potential hotspot to the next. Unfortunately, her face will also become widely known in conspiracy theory circles, and Dr. Clover could well find herself targeted. At the very least, some members of local police forces will recognize her, and be watching her with care - perhaps limiting her freedom to act. It would be fascinating to see how Dr. Staple and Clover try to contain the situation, and this is certainly the kind of pivot that Shyamalan would enjoy.

These are the two most obvious routes a Glass sequel could take, but it's important to remember one thing; if M. Night Shyamalan is involved, there's sure to be a twist. Perhaps Joseph will only believe he has powers, but in fact he actually doesn't; perhaps the superhuman treated by Dr. Staple really was someone suffering from a delusion after all. Or perhaps Dr. Staple is, in truth, a superhuman with an ability to persuade others, and over the course of the film she's outed to her bosses. When it comes to M. Night Shyamalan, it's wise not to assume too much in advance.