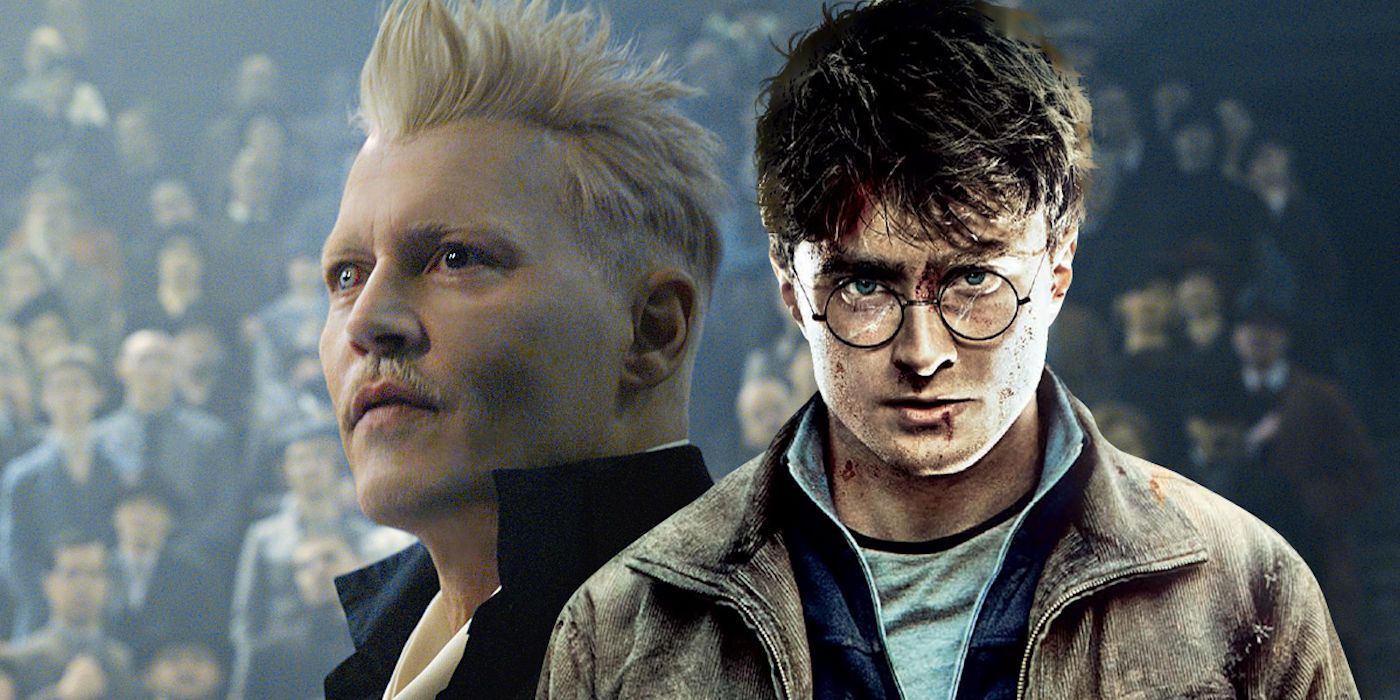 Grindelwald’s apocalyptic vision in Fantastic Beasts: The Crimes of Grindelwald has revealed a gap in the Harry Potter mythos, which the rest of the series is set to fill in. The second installment in the Fantastic Beasts series has proved to be a turning point for the expanding Harry Potter franchise and timeline. The Crimes of Grindelwald ended with the titular villain (Johnny Depp) victorious, with a growing army of followers, and the saga’s core team of heroes fractured and defeated.

This division is a fitting metaphor for Fantastic Beasts 2’s reception, because unlike its predecessors, The Crimes of Grindelwald proved to be a controversial offering for both critics and moviegoers. Several of the movie’s left field twists - including Grindelwald and Dumbledore's blood pact as well as the Credence/Aurelius revelation - stunned even the most die-hard fans. Many others were also unhappy with the film’s frequent departures from established canon, such as that of Professor McGonagall’s age.

In light of Fantastic Beasts 2's brutal reviews - not to mention being the first Harry Potter box office misfire - it remains to be seen whether J.K. Rowling and her fellow filmmakers will attempt to win back fans by “correcting” the course of their franchise. Yet while many viewers may hope for some sort of reconfiguration to be evident in Fantastic Beasts 3, it’s very likely that this won’t occur. Several of these infamous moments are clearly setup for the next three movies to expand upon or explain, meaning that Rowling will have to stick to their plan. Moreover Rowling has promised answers to The Crimes of Grindelwald’s surprising scenes in the near future.

Among the most compelling - and contentious - of these sequences was Grindelwald’s prophecy of World War II. This vision of the future has exposed an inconsistency within Harry Potter canon, and it may have revealed where the series will be going next.

For the majority of Fantastic Beasts: The Crimes of Grindelwald, the titular villain remains an elusive and manipulative presence. The true extent of Grindelwald’s cunning becomes clear when he gives a speech in Fantastic Beasts 2’s ending. At this point, the dark wizard has ensured that Newt Scamander (Eddie Redmayne) and his friends are trapped amidst his supporters as he begins his rally in the Lestrange family tomb at Père Lachaise cemetery.

Grindelwald rails against the injustices thrust upon wizard kind by their governments, and pledges to overthrow the Statute of Secrecy and install wizards as the rulers of all muggles. But while he has tapped into their anti-muggle prejudice, Grindelwald has something else that he hopes will motivate them. Using a skull hookah to channel his powers as a seer, Grindelwald soon projects a large, gaseous vision for the congregation. Soldiers and stentorian tanks erupt out of the smoke, followed by spitfires whirling over vistas of broken cities. These apparitions change into lines of darkened figures shuffling in columns towards freight trains. But soon, these sights are engulfed in the fires of an atomic bomb.

Despite the fact that Fantastic Beasts: The Crimes of Grindelwald takes place in 1927, it’s clear that Grindelwald has shown the assembly a glimpse of World War II, with key allusions to the Holocaust, Hiroshima, and even the devastation of the Blitz. Indeed, the dark wizard informs the crowd that this premonition will come true if the status-quo between muggles and wizards remains. It’s a gambit that pays off. Fearful and incensed, the crowd leaves convinced by Grindelwald’s claim, and prepared to spread his message.

Grindelwald’s vision of World War II is a significant moment for the Harry Potter mythos. In all of her writing for the Wizarding World, Rowling has referenced fixtures of the non-magical world through allegory and in general terms only. Contrary to this practice, the use of these militaristic images means that World War II is a direct part of this fictional world. This sequence is not just the most direct link to reality thus far; it also reveals the Second World War’s unique treatment within the Harry Potter universe.

The Harry Potter series predominately focuses on its hero’s journey, from Harry’s defeat of Lord Voldemort in his infancy, to the “Nineteen Years Later” epilogue in 2017. However, the world-building within these books (and Rowling’s additional texts) extends beyond the core tale. These include Albus Dumbledore’s (Jude Law) teenage years and even the formation of Hogwarts, which occurred centuries before the main plot. Certainly, Rowling’s attention to detail is one of her main strengths as a writer. Readers and moviegoers remain enthralled by her universe due to its meticulously crafted timelines, societies and character back stories. Therefore, it’s interesting to note how the period of 1930 to 1950 - particularly that of World War II - remains relatively unexplored. One of the only known landmarks of this time frame is Voldemort’s attendance at Hogwarts.

On first glance, it's understandable why Rowling could have deliberately avoided exploring WWII in the Wizarding World. Though, Indiana Jones and many other books and movies have referenced Nazis and the war in their stories, their usage can be controversial. Storytellers risk trivializing or misinterpreting the very real and lasting hardships of the WWII with either fantastical or sci-fi elements, especially since many survivors are still alive to this day. That isn’t to say that it isn’t possible for fiction to tackle the period. Plus, given that Harry Potter takes place some 50 years after the war ended, there’s no immediate need for Rowling to explore wizarding societies in WWII and risk causing upset unless it was absolutely necessary.

But it’s a different situation with the Fantastic Beasts series. The first of these films, Fantastic Beasts and Where to Find Them, takes place just over a decade before the start of the war. Indeed, Rowling’s omission of WWII becomes even more significant when we consider how much she expanded the Wizarding World for that movie, such as Newt’s war record and the detailed history of Ilvermorny School of Witchcraft and Wizardry. As such, it’s too coincidental that the world of Harry Potter in the 1930s and '40s remains relatively featureless. Yet Rowling’s intention becomes a little clearer when we consider the overall arc of the Fantastic Beasts franchise.  After all, it has already been confirmed that Fantastic Beasts 5 ends with Dumbledore’s defeat of Grindelwald in 1945. But this information - coupled with Grindelwald’s vision - gives fans a clearer idea of what to expect in Fantastic Beasts 3 and onward.

Ever since Albus Dumbledore and Gellert Grindelwald were revealed as key characters within the Fantastic Beasts saga, fans have guessed that the series would chart their fabled rivalry in more detail than ever before. Indeed, this villain had only been painted in broad strokes in the Harry Potter novels and, like Voldemort, Grindelwald was always intended to be viewed as a wizarding stand-in for Nazis. But fans had assumed that WWII would merely serve as backdrop - or a reference point - for Grindelwald’s rise to power. Instead, Rowling has denoted that the two regimes operated concurrently, with Adolf Hitler’s future ascension propelling Grindelwald’s own dictatorship in the wizarding world.

This has major implications for the overarching story of Fantastic Beasts. Now that Grindelwald’s vision has established the co-existence of these reprehensible regimes in this universe, fans should expect the three pending Fantastic Beasts sequels to call back to historical events far more than the Harry Potter series did. The wizarding and muggle wars will likely impact each other overtly, with Grindelwald potentially influencing real figures and events through his ideology and modus operandi - or vice versa.

Though this would surely be a bold move for Rowling to take with the Wizarding World, it could be a fitting change of pace if handled correctly. The Fantastic Beasts series may still cater to family audiences, but it has already strayed into grimmer territories than Harry Potter. While investigating the colorful history of Credence Barebone, moviegoers have already witnessed child abuse, infanticide and Corvus Lestrange’s rape via the Imperius curse. A deeper exploration of Grindelwald's (and Nazi) eugenics and fascism would serve as a continuation of this darker storytelling trend.

Additionally, in light of how previous Harry Potter stories treat fate and premonitions, the Fantastic Beasts sequels will have to address Grindelwald's abilities in a similar fashion. Indeed, prophets and their predictions have long been a critical part of the Harry Potter mythos. The latter half of the novel series prominently detailed how Lord Voldemort consistently undermined his own regime by attempting to stop prophecies that related to him from coming true. In Fantastic Beasts: The Crimes of Grindelwald, the dark wizard uses his own prophecies to manipulate his followers. Therefore, it will be interesting to see how Rowling and her characters deconstruct the threats of the Third Reich - and Grindelwald’s fanatics - in future Fantastic Beasts films.

More: What Fantastic Beasts 3 Needs To Do To Save The Harry Potter Prequel Series