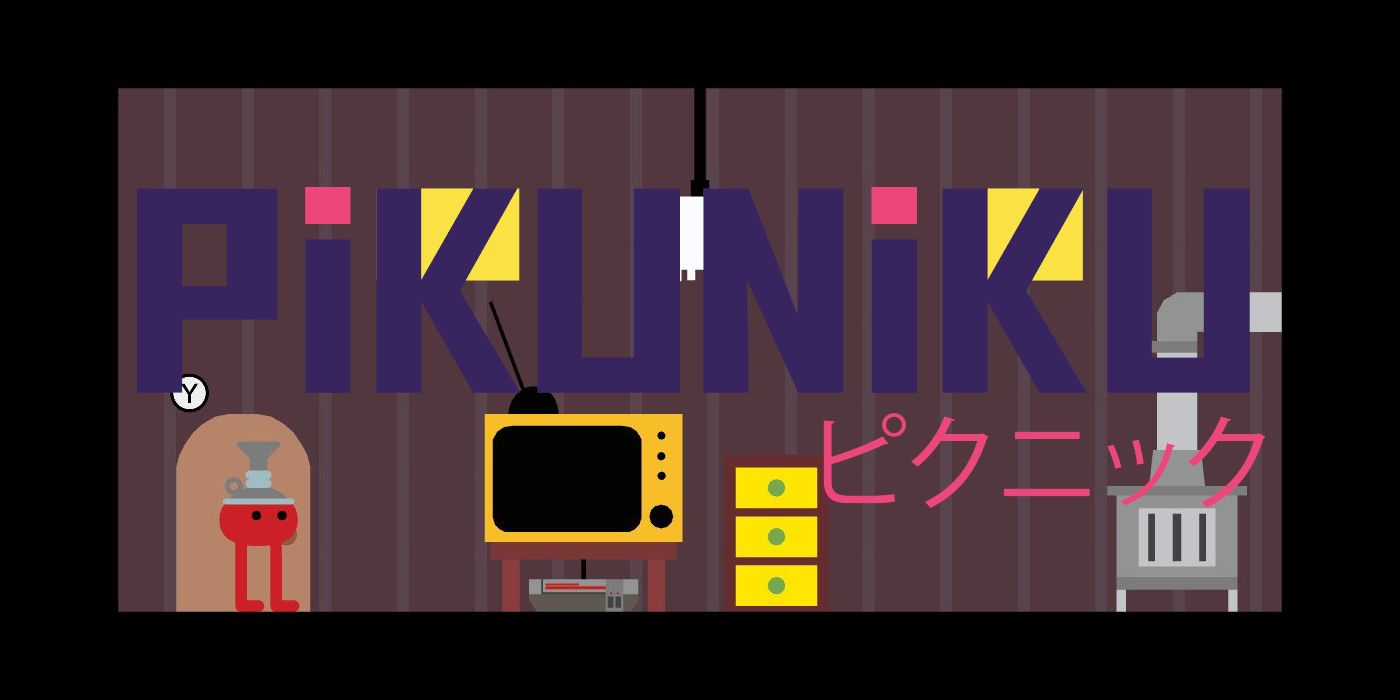 There’s an age-old performance standard of “leave the crowd wanting more,” but there’s arguably no other form of media where this expectation is interrogated as much as in video games. The promise of escape and absorption firmly meets a price tag, adding an inescapable economic concern, even in the case of low-cost games. Devolver’s newest platforming adventure Pikuniku is a delightful journey through a quirky, well-crafted world, but it’s hard not to be at least a little dismayed at the minimal size of it all.

Piku lies dormant and secure in a cave, waking up to its Platonic quest of escape. Upon emergence, the nearby townsfolk are terrified of the clearly adorable and simplistically designed little red oval shape with gangly legs, and the game’s early quest sees you attempting to broker trust with the terrified pear-shaped people, fixing what you can and trying to improve the town’s way of life, cast under the shadow of a clearly nefarious mega-corporation.

Pikuniku tries to juggle a few a things at once, combining a task-oriented adventure game, some cheerful low-stakes platforming, a smattering of mini-games and trivial boss fights, and a hugely entertaining script. The graphics are low on detail but high on charm, with weirdly-shaped bulbous characters pacing back and forth through environments that could have been crafted with construction paper by a kindergarten class. The animation in particular is pitch-perfect, everything from Piku’s scampering lanky legs catching step at the last moment, to some precisely timed facial expressions that greatly amplify the humor of the storytelling. Bolstering it all is a catchy and upbeat soundtrack which, while well-crafted, never quite reaches the iconic, ear-worming heights of something like Katamari Damacy, but it's certainly trying for a similar characterful playfulness.

The campaigning around the release of the game mentions something about a grand conspiracy at the center of the story, but it’s far less elaborate than that implies. Essentially, there’s a villainous presence behind the goings-on of the denizens of Piku’s world (which itself seems to make some light commentary about capitalism and the passive ignorance of the masses), but there’s very little to uncover before the whole experience draws to a close. Look closely at the game’s trailer and you’ll notice that it reveals the lion’s share of a complete Pikuniku play-through, even late-game content, all of which seems incredibly rich and diverse when framed as a minute-long montage.

Unfortunately, a focused player can gobble up the main story content in as little as three hours or less, which is admittedly reasonable for a low-cost game (retail price on the Nintendo Switch is expected to be $12.99). It’s more a matter of Pikuniku’s structure, though, and the richer adventure hinted at by the developing notes of the plot. There’s a point in the story when Piku ends up joining up with a few other characters which feels like the early portion of a JRPG, when all character slots are finally filled and the meat of the game lies ahead, but here there’s barely an hour more of content following this specific story turn.

Those are three fun-filled hours, though, with Pikuniku’s sharp writing, superb comic timing, and mostly enjoyable moments of interaction. A rhythm game may suddenly arise, or an opportunity to draw your very own scarecrow’s face, and these non-platforming surprises almost always lead to another smart joke or absurdist interlude. Piku itself is an adorable creature, eyes blinking blankly or staring in horror when falling from a tall height (there’s no fall-damage, by the way), harmlessly kicking characters around, and even able to bop along to the upbeat soundtrack when pressing the X button at any time. While the writing might seem skewed to adults and/or appreciators of nuanced sarcasm, Pikuniku makes for a wonderful experience for children and young people as well, and there’s nothing worrisome or dark to uncover — certainly nothing darker than a downcast episode of Adventure Time.

Speaking of young people, they’d probably also get a kick out of the few multiplayer modes available to players from the title screen. You can select from nine co-op levels, as well as a simple competitive sport where two players compete in a goofy form of basketball with a watermelon (a game which is briefly featured in the main quest as well). The co-op content is fun but brief, and it would’ve been nice if there were some kind of persistent “younger sibling” co-op made available in the standard story mode as well, a la Sonic and Tails.

Pikuniku isn’t preoccupied with presenting challenge, just delivering an amusing little carefree world in which to get lost in for one or two sittings. At a glance, it might seem reminiscent of those imaginative Locoroco games for the PSP, but it has much more in common with last year’s Donut Country; its tone and style is modern, slightly snarky, yet also somewhat shallow. If it was expanded into a game twice its length, it could be heralded as a masterpiece, rather than the pleasant and cute diversion it amounts to upon completion. For players who immediately click with its clumsily charming sense of character and minimalist aesthetic, their main critique will be wanting much more.

Pikuniku releases on January 24 on Steam and the Nintendo Switch eShop, with a suggested retail price of $12.99. Screen Rant was provided a Nintendo Switch digital code for the purposes of this review.