The Kid Who Would Be King Review: Joe Cornish Delivers A Modern King Arthur Story 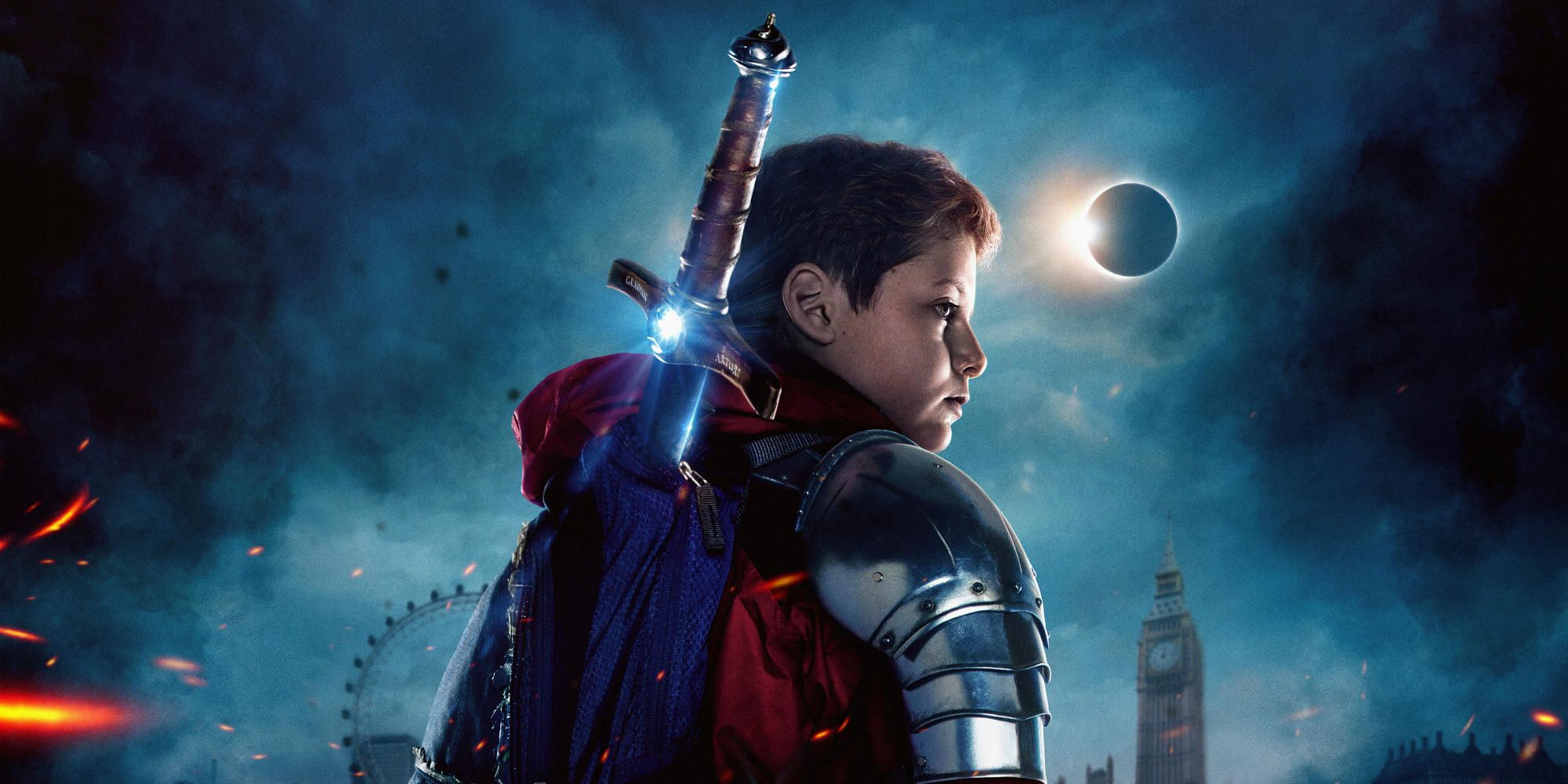 Joe Cornish's The Kid Who Would Be King is a stylish and earnest modern retelling of the King Arthur story that's fun for the whole family.

The story of King Arthur and the Knights of the Round Table has been around for centuries and has been told, and retold, many times throughout modern media. It's been adapted into multiple films and television series, ranging from live-action to animated fare, with the latest being The Kid Who Would Be King. Loosely, the story tells of a young boy named Arthur who pulls the sword Excalibur out of a stone, indicating he's the rightful king of Britain. As king, he assembles a group of knights who join him at a round table, where everyone is equal, and the group battles the forces of evil. The legend of King Arthur has been adapted in a number of different ways over the years and The Kid Who Would Be King brings it to modern times, for a live-action high fantasy adventure. Joe Cornish's The Kid Who Would Be King is a stylish and earnest modern retelling of the King Arthur story that's fun for the whole family.

The Kid Who Would Be King tells the story of Alexander Eliot (Louis Ashbourne Serkis), a normal kid who's just trying to survive school with his best friend Bedders (Dean Chaumoo), though the two are often bullied by their classmates Lance (Tom Taylor) and Kaye (Rhianna Doris). Then, everything changes when Alex discovers Excalibur in a cement block on a build site and he manages to pull the sword from the stone. Unwittingly, Alex has put himself on a collision course to go up against the evil witch Morgana (Rebecca Ferguson), the half sister of King Arthur who was trapped in hell long ago by the king of legend. Merlin (Patrick Stewart) arrives in Alex's school in London in the form of a teenager (as played by Angus Imrie) as a way to protect Alex and prepare him for Morgana's return.

However, Alex doesn't want to believe his role in the battle against Morgana, who returns at a time when the world is divided and men don't follow the honor code that made Arthur and his knights pure of heart. Once Alex is attacked by a spirit of hell brought to life by Morgana's magic, though, he begins to accept Excalibur chose him for this fight. Per Merlin's instructions, Alex assembles allies in the form of Bedders, Lance and Kaye and the four set off on a journey to discover the entrance to hell so that Alex can defeat Morgana once and for all. However, with all four forced to honor King Arthur's moral code or else their quest will end in failure, the once and future king and his allies will struggle to live up to the expectations that come with the Arthurian legend. And, on top of that, Alex will need to defeat Morgana or else she'll enslave the country of Britain under her own, hellish rule.

The Kid Who Would Be King was written and directed by Joe Cornish, whose last film was the 2011 sci-fi/action-comedy Attack the Block (featuring a pre-Star Wars John Boyega). Though Attack the Block wasn't a box office success, it received positive reviews and has since become somewhat of a cult classic and been praised for its inventive concept as well as Cornish's social commentary and distinct directorial style. For The Kid Who Would Be King, Cornish returns with a movie that very much fits in with the earnest kid-led action/adventure of the 80s and 90s. Like The Goonies - and many other films - before it, The Kid Who Would Be King follows a group of kids who may not necessarily get along but who put their personal differences aside in order to save their world.

But rather than local legend, The Kid Who Would Be King deals with the kind of mystical story seen more in The Hobbit and The Lord of the Rings, giving it a unique blend of modern and high-fantasy sensibilities. For his part, Cornish's script and direction manage to smoothly weave these elements together for a cohesive film. The Kid Who Would Be King isn't so much a retelling of the King Arthur story as it is a continuation, wherein Alex isn't a descendant of the Pendragon line, but simply a kid whose heart makes him worthy of wielding Excalibur. Through this story, Cornish delivers a heartfelt message about the importance of following a moral code and the power even young kids and teens have to change the world. The Kid Who Would Be King is not subtle about its messages, reaffirming them over and over again throughout the movie, but legends and folktales are typically passed down to teach children certain lessons, and that's exactly what Cornish's movie does.

For their parts, the young cast of The Kid Who Would Be King bring a great deal to the (round) table in the film, helping to immerse viewers in this urban-fantasy world. Serkis excellently embodies the qualities of a young Arthur-style character, but with the mentality of a modern kid, making for some fun and silly moments in the movie. Chaumoo's Bedders is also a fun sidekick character, though he does receive an arc of his own. Taylor's Lance and Doris' Kaye are slightly underdeveloped but serviceable for the story and fit in well with the group. Imrie is a standout as the young Merlin, an offbeat character who manages to pull off magical elements in the modern world for both dramatic and comedic effect - though the character's more earnest, emotional moments are given to Stewart. As for Ferguson's Morgana, the character is little more than a stock villain, with the actress given little to do thanks to the script. Altogether, though, the cast is solid enough not to get swallowed by the film's concept.

Perhaps where The Kid Who Would Be King struggles the most is in the third act, since it must deliver a climactic battle between Alex and Morgana that feels epic enough for the film's high-fantasy concept but not too violent for a kid. Unfortunately, the resulting sequence is a little anticlimactic, with preparations for the final fight being more exciting than the battle itself. Further, by the time that final battle arrives, The Kid Who Would Be King begins to feel a little overlong due to pacing issues, stretching the attention span of an adult viewer - let alone kids in the audience - with its two-hour runtime. The story is exciting enough to engage viewers, but lags at certain times.

The Kid Who Would Be King is now playing in U.S. theaters nationwide. It is 119 minutes long and rated PG for fantasy action violence, scary images, thematic elements including some bullying, and language.